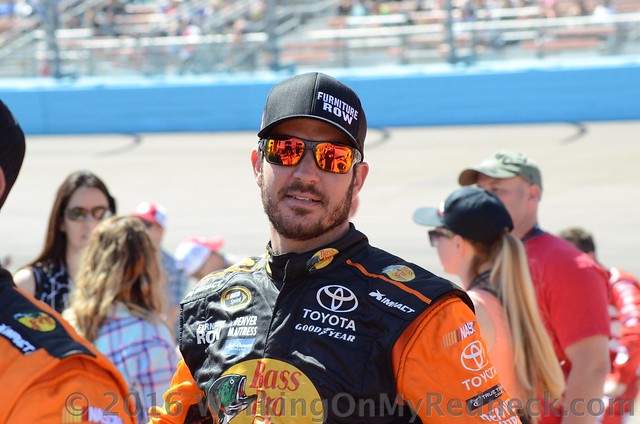 The heartbreak kid survived 600 miles without another broken heart!

Instead, Martin Truex Jr. broke records in Sunday night’s victory in the Coca-Cola 600 at Charlotte Motor Speedway, a race in which the driver of the No. 78 Furniture Row Toyota set new standards for domination.  In fast you could classify this as just an old fashion blue collar butt whippin’!

Truex led 392 of 400 laps, most ever in NASCAR’s longest Sprint Cup Series race. He spent 588 of 600 miles at the front of the field, most ever in a single race in NASCAR history!

And when it was over, Truex had his first victory of the season, the fourth of his career, and punched his ticket to the Chase for the NASCAR Sprint Cup. Perhaps more important, Truex erased a litany of crushing disappointments that continued into this season and ruined potential winning efforts at Texas, Kansas and Dover.

“It’s just kind of sinking in now that we won the 600,” Truex said in Victory Lane. “Really proud of my team – everybody that made this possible, that believed in me, gave me this opportunity. (crew chief) Cole Pearn, Jazzy (team engineer Jeff Curtis), my guys are something special.

“I want to thank all of them. This is a big day. Got the troops on the cars (for Memorial Day recognition). This is a special weekend. It’s really neat to bring that name (of fallen hero Gunnery Sergeant Jeffrey E. Bohr Jr.) home to Victory Lane. Just a lot of emotion right now. Not really sure it’s sunk in yet. Just an amazing day, an amazing weekend for all of us. It’s a weekend you dream about.”

Denny Hamlin and Brad Keselowski completed the top five, but the night belonged to Truex.

When darkness fell, Harvick’s No. 4 Stewart-Haas Racing Chevrolet came to life, but the tight handling condition that developed over the final 80 miles prevented him from taking the fight to Truex.

“Well, I saw him for about 50 miles or 75 miles,” Harvick said. “The rest of the night I never saw him. I was back there swatting flies in the middle of the pack. I didn’t have a lot of time to see the 78.”

Johnson was pleased with the speed in his own No. 48 Chevrolet, but it was no match for Truex’s Camry.

“I kind of felt like he was playing with us,” Johnson said. “He was so fast. I would flatfoot (Turns) 1 and 2, and have a nose on him, and he would drive right back by me into Turn 3. It was so fast. It was very impressive. I’m happy for Martin. That team and those guys worked awfully hard to get where they’re at.”

But for the vagaries of green-flag pit stop cycles, Truex was out front for the entire race.

“I had confidence,” Truex added. “I had faith. I had confidence in my team. I’ve got a lot of great people behind me. Sherry (Pollex, Truex’s girlfriend and an ovarian cancer survivor), she gives me a lot of inspiration.

“And we keep on fighting. We never give up. We never quit. We always keep digging, and I’m proud of my guys for sticking by me. They all did a great job tonight. There are so many fans that have supported us the last few years with so many heartbreaks. I really appreciate that. I really had fun tonight.”

Check out the unofficial results of the Coca Cola 600.