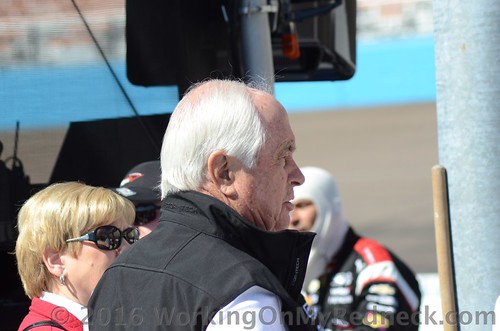 It was 1951 when Jay Penske scored a pair of tickets to the Indianapolis 500. He was an executive for a metal fabrication company in Cleveland that was sponsoring a few laps in the race, so he brought his 14-year-old son to Indianapolis Motor Speedway.

Roger Penske, already a car lover, was instantly hooked. He had listened to previous Indy 500s on the radio, but was now seeing it in person for the first time.

“We drove here from Cleveland and got here late and were supposed to go to someone’s home for lunch,” Penske recalled. “Everybody was gone but there was a car there. I got my picture taken with a Cromwell helmet on.”

That day, Penske said, he wanted to drive. And he would come to the track every year after for the next four decades.

“I think the speed here, the sensation of the track, and if you love cars like I did in those days, it was a place you wanted to be part of,” Penske said.

From that first trip to the speedway to present day, Penske has missed just six Indianapolis 500s. There was 1995, a year after Al Unser Jr. won the race for Team Penske, when his cars failed to qualify. Then he took a five-year hiatus when IndyCar split from CART and Penske remained with the series that was not welcome at the Indianapolis 500.

There have been precious few low points for the billionaire team owner whose influence stretches across both IndyCar and NASCAR. As Penske celebrates his 50th year in racing, during the 100th running of the Indianapolis 500, the mark he’s left on the motorsports community is unrivaled. In an Associated Press survey of the 27 living winners of the Indy 500, Penske fell just four votes shy of longtime track owner Tony Hulman as the most important non-driver at Indianapolis Motor Speedway.

“He’s been there such a long time, he prepares things to such a significantly high level of professionalism,” said 1996 winner Buddy Lazier. “Everybody then has to bring themselves up to that level. As long as I’ve been involved in the sport, Roger Penske is huge.”

He wanted to be a race car driver. His father wanted him to be an entrepreneur, and his son spent time in military school learning the discipline and standard of excellence that he maintains today at age 79.

Penske indeed briefly dabbled in auto racing and was quite good. But he had a job at Alcoa and couldn’t get the time off needed to properly race. So he retired from racing in 1965. He was trying to buy a Chevrolet dealership in Philadelphia, but General Motors didn’t want to give a franchise to a race car driver. Using a loan from his father to buy his first dealership, Penske had to step away from racing to focus on earning back the funds needed to repay dad.

“I had to make a pretty good business decision at that point: Do I continue racing or do I go into business?” Penske said. “I think I made the right decision, because I was able to have the experience as a driver, understood what it meant to have reliable and great cars, and was able to bring that into our team a few years later. From that point, we never looked back.”

Four years after his retirement, Penske was back at the Indianapolis 500 with his own race team. Mark Donohue drove the No. 66 and gave Penske he first of his record 16 Indy 500 victories in 1972.

“Driving for Roger is like going to Disneyland,” said Bobby Unser. “You say, ‘Wow, look at this. I’ve got everything now.’ You have it all, the best. Roger gives you the best cars, parts, equipment and team to make you a winner. And he will work day and night to make things perfect. That motivates everyone around him.”

The teams are run the way Penske runs his businesses: Efficiently, with an eye for detail and a respect for everyone involved. He demands excellence and professionalism, and he makes everyone around him rise to that level. To this day, The Captain and his committee of executives are notorious for their starched white shirts and black pressed slacks.

“I remember they called us the crew-cut guys with the polished wheels,” he said. “We just had white shirts and when we sent them to the cleaners they’d come back with starch in them. I didn’t know that we were so special on starched shirts. I guess, again, it’s my military training.”

Mears was Penske’s first multiple 500 winner and to this day is a driver/coach for Team Penske who is heavily involved in all at-track activities. On Thursday, Penske noted that his current crop of drivers learns something from Mears everytime they are in the car.

“Roger’s main trait is to lead by example,” Mears said. “He motivates people. He makes them all feel like part of the team.”

It’s an example that is often imitated by Penske’s peers.

His top rival in open-wheel racing is Chip Ganassi, he knows he’s chasing Team Penske every weekend. He wouldn’t have it any other way.

“Racing would not be where it is today without Roger Penske,” said Ganassi. “He brings out the best in all of us owners because we know that we need to bring our A-game to beat him. When we do, you know you have accomplished something.”

Castroneves on Sunday will be one of four Penske drivers trying to win for The Captain in the 100th running of the historic race. The team won with Mears in the 75th running of Indy, and Penske wants this centennial victory more than anything. If he gets it from Castroneves, he’ll have two four-time winners in the club that currently only has three members – Mears, Al Unser and A.J. Foyt.

Castroneves desperately wants the victory for his boss.

“Roger is a very good businessman and has a very hectic schedule,” said Castroneves. “But he leaves this week open to be here for every single practice. When you have that type of leader doing that, you know that this is his passion. It’s not just a hobby. The mechanics see it, the people in the shop see it, we see it and it is why you want to see Roger win – to make the boss happy.”

Penske doesn’t like to rank his favorite moments. He’s had so many ups and downs at Indy, none lower than 1995 when he failed to get both Al Unser and Fittipaldi into the race.

“There are so many times that you probably cried and you cried because you were happy and cried because you were not happy,” he said. “I walked side-by-side back to that garage area (with Fittipaldi and Unser) having missed the race after dominating it in 1994. But so many other victories we’ve had, it’s hard to say because each one of them was special.”

When it comes to excellence in racing, there is no doubt that Roger Penske and Team Penske is the gold standard to which every team owner aspires to be like!  They are the team in the starched white shirts and black pants.  But they are so much more, they are the team with 16, count them, 16 Indy 500 victories.  That number is the most of any race team that has ever competed at The Brickyard!

So as we race fans gather to watch The Greatest Spectacle In Racing we could see more history in the making from Team Penske!