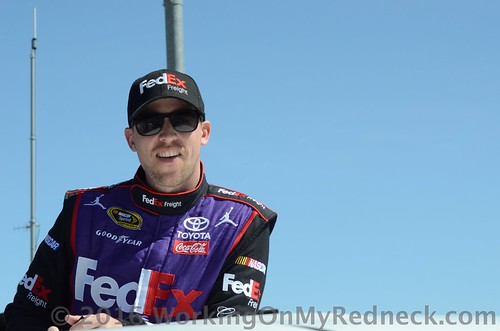 Denny Hamlin used “four fresh feel goods”, better known as Goodyear tires, to storm past both Kyle Larson and Joey Logano on an overtime restart and steal the victory in the Hisense 4K TV 300 at Charlotte Motor Speedway on Saturday.

The overtime, two lap shootout paired up two cars with 30 lap old tires and the rest of the field with a combo of two or four fresh tires. When the green flag dropped the excitement was cranked up to 25 on the meter!  Hamlin’s four fresh shoes was way too much for either Logano or Larson to try to fend off at Charlotte, this giving Hamlin the victory!

It was Hamlin’s first 2016 XFINITY Series victory and his first series start this season.

Defending race winner Austin Dillon, who also chose to pit just before the restart, finished second in his No. 2 Richard Childress Racing Chevrolet.

Both Logano and Larson, leading at the time of a caution with two laps remaining, chose to stay out on older tires, while those behind them pitted.

XFINITY Series points leader Elliott Sadler, who was caught up in a wreck early in the race, finished 28th. The result dropped Sadler to second in the standings, behind Daniel Suarez.

The 200-lap, 300-mile race included a 17-lap caution when a handful of the leaders skidded across oil that had leaked from the car of No. 07 of Ray Black Jr.

The slowdown occurred on Lap 24, when Erik Jones, who started from the pole, slammed into the outside wall after encountering the oil, and Daniel Suarez saw his car skid toward the infield before he spun back onto the track and collided head-on with Sadler.

Check out the unofficial results of the Hisense 4K TV 300.