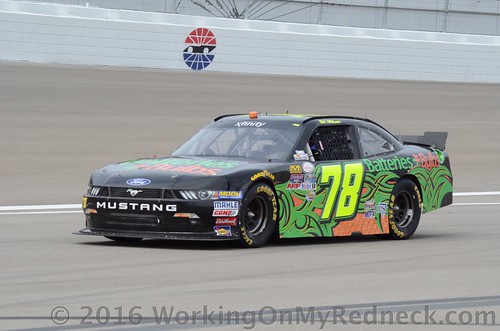 In fact, the last two NASCAR races have been full of success for the 32-year-old avid racer.

Before earning his first top-20 of the season at Dover, McLeod wrestled his No. 07 SS Green Light Racing Chevrolet Silverado to a career-best truck series finish of 15th at Kansas Speedway earlier this month.

The recent spike of on-track results has given the Wauchula, Florida native a positive outlook heading into the 11th race of the season and his third start at Charlotte’s 1.5-mile speedway oval.

“I’ve been very fortunate to have two really good pieces to drive at Kansas and Dover,” said McLeod. “Both teams have worked incredibly hard not only to put a competitive car on the track, but also their faith in my ability as a driver to make the most of it.

“Dover was a blast. I had never been there in an XFINITY car before, but it’s something I won’t soon forget. The car was really good from the moment we unloaded. We didn’t make a lot of changes. We missed the setup a little bit for qualifying, but when the race rolled around, we went forward.”

As an owner and driver on the XFINITY Series tour this season, McLeod doesn’t shy around the fact that at times he may not have raced as hard as he wanted too, but the team’s overall performance at Dover instantly proved that their concessions are now paying off.

“We had to be conservative at times to make sure we made it to the checkered flag, now that we have some breathing room, we’re able to make some gambles,” added McLeod. “At Dover, the car was just really good. We adjusted, the car reacted and we found ourselves finishing in the top-20.

“This weekend at Charlotte is a huge race with a lot of heavy hitters, but we’re still going there with the intentions of backing up what we delivered at Dover. A top-20 is for sure realistic, but I think our main goal is to keep going to the track and making gains and tallying points. As long as we continue to do that, we’re doing good.”

After having NASCAR veteran Travis Kvapil as a teammate for the last three XFINITY Series races, Cody Ware will pilot the No. 15 JJ Aim Right Gun Shop Ford Mustang in a collaborative effort with Rick Ware Racing (RWR).

“Travis really did a lot over the last couple of weeks to help both programs and he’ll be back, but I’m excited to work with Cody again,” he added. “Cody brings a lot of ideas to the table as well as positive vibes both in and outside the garage. He’ll be making his Charlotte debut this week, so I look forward to chatting with him and helping him where I can.”

Veteran industry crew chief George (David) Ingram Jr. will call the shots for the No. 78 B.J. McLeod Motorsports Ford Mustang for the 11thrace of the 2016 NASCAR XFINITY Series season.

For more on B.J. McLeod, please visit his official Facebook page, while also visiting the team’s new website at BJMcLeodMotorsports.com.Additionally, the team is growing their presence on Twitter, with the team’s new account @teamBJMcLeod. McLeod also utilizes his personal twitter too, @BJMcLeod78.