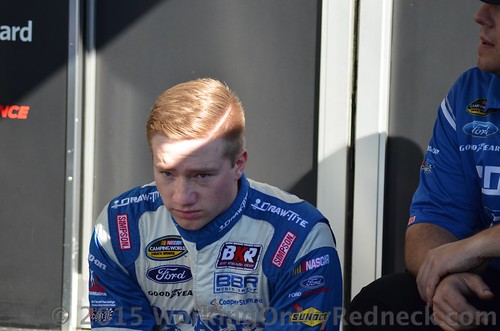 The former Dirt Late Model driver from Corning, Calif., a small town with a population of 7,663 during the last census that is just west of Chico, CA, is embarking on his third season (second full-time) with BKR. Months after falling short of winning the team its first Truck Series title since its inception in 2008, Reddick gave the team its second straight runner-up finish in the standings last season. Following Ryan Blaney’s path set in 2014, Reddick was able to out-run Blaney’s mark of one win, 12 top 5s and 17 top 10s. Last season, Reddick earned two victories, 14 top 5s and 19 top 10s for BKR, ending the year runner-up in the overall standings.

However, amidst the consistency, two trophies might not be enough to help Reddick move through the NASCAR ranks!

After the sixth race of the year at Charlotte Motor Speedway, Reddick’s No. 29 team sits eighth in the standings. Finishing 13th or worse in the first four races, the team has since secured back-to-back top 10s at Dover International Speedway and Charlotte.

Reddick, 20, does not know what the future holds for him. He is unsure of whether he will return to BKR next year. Additionally, as of now, he is not scheduled to compete in any XFINITY Series contests for Team Penske in 2016, which is aligned with BKR via owner Brad Keselowski.

As the season approaches the halfway mark, Reddick is beginning to look for a deal for next year. With a goal of moving up to the XFINITY Series on at least a part-time basis next year, it is unclear at this time if he will return to BKR, or if he will remain under the Penske banner in any form.

According to Reddick, he has not had any discussions with Penske officials about competing in the team’s No. 22 Ford in the XFINITY Series. Through May, the car has been piloted by a trio of Sprint Cup drivers, including Keselowski, Blaney and Joey Logano.

The No. 22 car has a handful of open races available with all three of its drivers competing full-time in NASCAR’s premier division. As of now, no driver has been announced for the stand alone events at Iowa Speedway, Mid-Ohio SportsCar Course and Road America.  Will Team Penske prevail upon Reddick to fill the seat for these three races later in the season?

“I would like to,” Reddick said on the possibility of running XFINITY Series events. “I have not heard anything yet. At this point, it looks like I’m going to just be running the Truck Series.”

Last year, the team utilized Blaney’s services at the stand alone events, along with road course specialist and IndyCar Series competitor Alex Tagliani. “Tags” started on the pole and finished second at Mid-Ohio in 2015, leading 38 laps.

It will be interesting to see what will follow for Reddick.  Will Team Penske put him into an XFINITY ride for 2017?  Will Reddick realign himself with another team that will cultivate this young talented driver?  That and many other answers will begin to unfold as the season progresses!