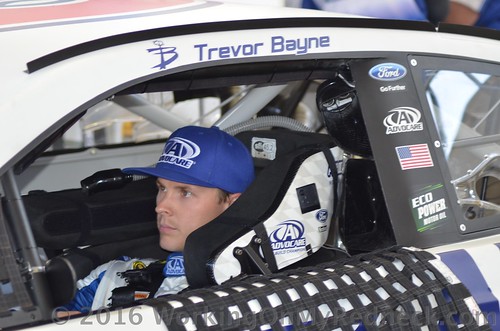 In seven career starts in the XFINTIY Series at the 1.5-mile oval, Bayne has recorded one top-five, five top-10s and has an average finish of 9.4. His best finish was third in Oct. 2011.

Puccia will be atop the box for his 10th NSCS event at Charlotte on Sunday night.  In nine previous races, Puccia has recorded three top-five finishes and three top-10 finishes, with a best result of second in the 2015 running of the 600 with Roush Fenway teammate Greg Biffle.

Bayne won Segment One of Saturday morning’s Sprint Showdown in a photo-finish with Chase Elliott to earn a spot in the All-Star Race later in the night. Bayne would go on to record a seventh-place finish after running as high as fourth in the final segment of the All-Star Race.

Bayne trails the 16th and final position in the Chase for the NASCAR Sprint Cup championship standings by eight points.

Bayne and the No. 6 AdvoCare Ford will participate in “600 Miles of Remembrance” on Memorial Day Weekend to honor military service members and their families.

For this weekend, the name of Chief Warrant Officer 4 (CW4) Jason McCormack will be placed atop the windshield of the No. 6 AdvoCare Ford.

Upon completion of the AH-64D Flight School XX1 in 2004, McCormack proceeded to B CO 1st Battalion 101st Aviation Regiment, Fort Campbell, Kentucky.  He served the next six years of his Army career with the Bearcats of B CO, before attending the AH-64D Instructor Pilot Course in 2009.

After completing the AH-64D Instructor Pilot Course, McCormack served two years with A CO 1-101 “Spectres” as an Instructor Pilot.  While stationed in Fort Campbell, McCormack completed three deployments in support of the Global War on Terrorism; Iraq (2005) and Afghanistan (2007, 2010).

McCormack’s next assignment was to A CO 1-14th Aviation Regiment, Fort Rucker, Alabama.  His next three years consisted of serving as an Instructor Pilot and Platoon Leader, teaching young Officers and Warrant Officers how to become the finest Attack Helicopter Pilots in the world.

Upon completion of his tour at Fort Rucker in 2015, McCormack would go on to serve as a Company Standardization Pilot and Battalion Master Gunner for 4-2 Aviation, Camp Humphreys, Korea.

McCormack died while conducting a training flight in South Korea on November 23, 2015.

Jason loved to fly the most sophisticated of aircraft and driving sports cars with his son. He shared his knowledge and humor with everyone he met, positively impacting all who knew him.

He is survived by his wife, Sadie and their two children, son Cameron and daughter Addison.

Roush Fenway Racing will host their annual Fan Day on Thursday, May 26th.  Bayne will sign autographs at 11:15 a.m. Ticket distribution is at 8 a.m.

“Racing at Charlotte on Memorial Day weekend is always special. It gives you a chance to race at home in front of your friends and family and also gives all the guys at the shop that don’t get to come to the race track a chance to come out and watch all of their hard work on the track. In addition, it’s an honor to carry Chief Warrant Officer Jason McCormack’s name on the windshield of our AdvoCare Ford as well as having the SEAL Legacy Foundation on our car. Weekend’s like this give us an opportunity to show how much we appreciate everything our military does to help us keep our way of life.”

At AdvoCare, We Build Champions® through physical and financial wellness. Backed by the latest science, AdvoCare provides innovative nutritional, weight-management, sports performance and skin care products. In addition, the AdvoCare business opportunity empowers individuals to explore their ultimate earning potential. AdvoCare was founded in 1993 and is headquartered in Plano, Texas. For more information, visit http://www.advocare.com/ or call 800-542-4800.