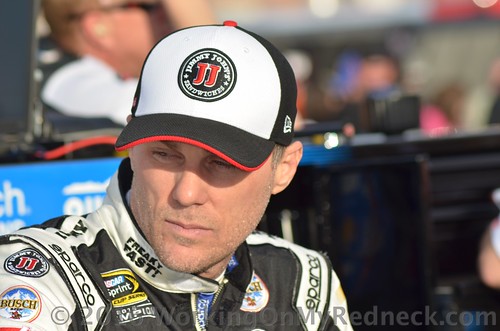 Kevin Harvick, driver of the No. 4 Busch Light Chevrolet SS for Stewart-Haas Racing (SHR), started at the front of the field and led early, before a mechanical issue foiled his strong performance in the NASCAR Sprint All-Star Race non-points event at Charlotte (N.C.) Motor Speedway on Saturday night.

“We just had something that went wrong,” said Harvick, who won the All-Star Race in 2007. “It’s unfortunate, because we had a really fast Busch Light Chevrolet. It was really, really fast, but I just got to a point where I couldn’t steer anymore in traffic or in the corner. It just made it tough.”

Harvick started first out of 20 cars after a late-afternoon rain shower forced the cancellation of Sprint Cup qualifying on Saturday afternoon. NASCAR set the starting field according to the Sprint Cup rule book, allowing Harvick to start from the pole position based on owner’s points.

The annual non-points race featured drivers who met one of the following criteria:

– Is a past All-Star Race winner.

– Is a Sprint Cup champion from the past 10 years.

– Won one of the three segments in Saturday afternoon’s Sprint Showdown.

– Finished in the top-two of the Sprint Fan Vote.

The 113-lap race around the 1.5-mile oval was broken up into three segments of two 50-lap segments and the final 13-lap segment to the finish and featured a 20-driver field.

Harvick dominated the early going by leading 21 of the first 25 laps before surrendering a 3.3-second lead to come to pit road for a four-tire stop on lap 26. The stop dropped Harvick down a lap to the leaders, but he was able to race his way through the 20-car field and back into the fourth position by the end of the first of the two 50-lap segments.

The Bakersfield, California, native returned to pit road for a four-tire pit stop at the end of the first segment and restarted the second segment in 10th. Shortly after the start of the second segment, Harvick radioed the team that his steering wheel was not responding as it did early in the race. He brought the car to pit road under caution on lap 66 for the team to inspect the issue. Harvick returned to pit road a second time to allow the team to take a closer look, but unfortunately they were unable to resolve the issue.

The 2014 Sprint Cup champion battled the mechanical issue for the remainder of the race and finished 11th after the final 13-lap dash to the finish.