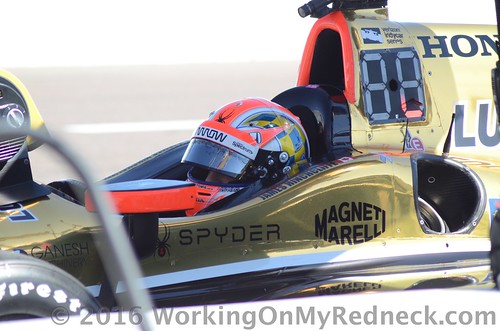 His alarm clock sounded off early this morning, but this was one time a groggy James Hinchcliffe appreciated the wakeup call.

He had to be on track at Indianapolis Motor Speedway at 7 a.m. to take part in the front-row photo for the 100th Running of the Indianapolis 500 presented by PennGrade Motor Oil.

“That’s an alarm you don’t mind going off for,” said Hinchcliffe, understandably ecstatic a day after claiming his first Verizon IndyCar Series pole in what will be his 79th start, in one of the most prestigious races of his life.

Jeremy and Arlene Hinchcliffe arose early, too, to watch their son in the photo shoot.

“It’s still sinking in, to be absolutely honest,” Jeremy said.

“It began sinking in at that point,” Jeremy said. “It’s pretty spectacular.”

On this same Monday after qualifying last year, James Hinchcliffe nearly died in a practice crash. By the time his parents had arrived at IU Health Methodist Hospital from Canada, their son was out of surgery and stable.

“We knew the worst was over,” his father said, “and I had every confidence he would get back in the car. That’s just James.”

Truth be told, as childhood memories are shared from their days just outside of Toronto, James has always been driven about wanting to drive. As a young child, he would sit for hours in his father’s Austin-Healey Sprite sports car. At 7, he made new friends while watching his father participate in vintage car racing. At 9, James received his first go-kart and started racing.

“By the time he was 12,” Jeremy said, “he was going to be an Indy car driver and there was absolutely no doubt in his mind.”

Although he never raced vintage cars, the Vintage Automotive Racing Association of Canada proudly claims him as a member.

Those happy for “The Mayor of Hinchtown” include his fellow competitors. When he arrived in the media center for his Sunday news conference after winning the pole, Hunter-Reay embraced his former Andretti Autosport teammate and said “a few words that meant a lot.” A few minutes earlier, Hunter-Reay had said, “I’m super happy for Hinch.”

“If it wasn’t me, you cannot help but smile for Hinchcliffe,” Bell said. “Amazing. Just terrific.”

Drivers don’t like to be reminded of their mortality, but racing has a lengthy history of being brutally cruel. Two of the more popular drivers in recent years were killed on track, Justin Wilson last year and Dan Wheldon in 2011.

Hinchcliffe said he’s seen his Turn 3 crash at Indianapolis “a thousand times.” What helps is he doesn’t remember how a suspension wishbone went through his right leg and into his left and broke his pelvis. He lost about 14 pints of blood. It wasn’t until five days later that he realized the seriousness of his accident.

That’s why the Canadian who always seems to have a smile on his face is one of the more popular Indy 500 pole winners in recent history. That and the fact that fans love to root for underdogs. He certainly qualifies, especially after losing his ride with Andretti Autosport in 2014 after three seasons.

Just like after the crash, Hinchcliffe didn’t stay in neutral any longer than necessary. He accepted a job with Sam Schmidt.

“Is it going to help worrying about it? It’s not,” Hinchcliffe said today. “I’ve always tried really hard to be very aware of the situation that I’m in, in the sense of how lucky I am that I get to do this. You lose one opportunity, you get another one. I’ve always wanted to be the guy who understood that and appreciated that. A door closes, a window opens. I still have the opportunity to be here and be doing this.

He considers this Indy 500 pole about as important as a win, considering the buildup and magnitude of the 100th “Greatest Spectacle in Racing.”

“A win is still a win and those are always going to be special, but what we did as a group here at Schmidt Peterson Motorsports over the weekend was awesome,” he said. “Getting all three cars in the top 10, Mikhail (Aleshin) and I running in the Fast Nine Shootout, and obviously getting the (No.) 5 car on pole, 100th running, my first pole, a year on from everything else that happened, to be the last guy on track, the way it all went down, the drama behind it all, it made it a really special day, for sure. And we got 42 points, which is almost like a race win.”

The social media post showed a picture of the Indianapolis Motor Speedway scoring pylon at night, with his No. 5 in the top spot.

Hinchcliffe is well aware a pole sitter hasn’t won the Indy 500 since 2009, so there’s a limit to how much he can savor the accomplishment.

“I’m kind of stuck trying to find this nice balance between enjoying this because it is a big moment and focusing on the race,” he said.

Sure, he deserves to take a bow. So, too, does his crew. But then it was back to work for this afternoon’s last full practice, when teams finalize race setups with long runs.

“It’s not just me who went through something last year,” Hinchcliffe said. “All of these guys are massively invested in what we do, we’re all close friends on a personal level, it was hard for everybody. As a team, to come back and do what we did Sunday, it’s just incredible. It’s as emotional for those guys as it was for me.

“It’s not the win yet. We’ve got 10 miles out of the way. We’ve got 500 to knock out. But I am trying to let myself enjoy it a little bit more than maybe I would have last year. New me lives even a little more in the present than old me did because you don’t know when the present stops happening.”

Tune in Sunday morning at 1 am EST for The Greatest Spectacle in Racing on ABC and see if “The Hinch” can be the first pole winner to win the Indy 500 in 17 years!