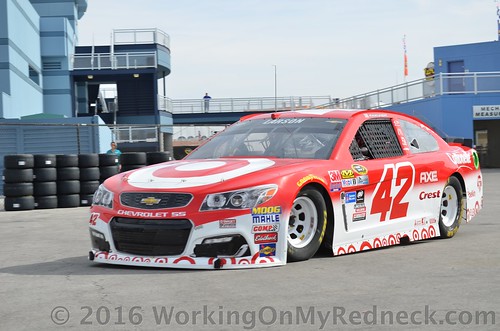 The three segments of the 2016 Sprint Showdown were definitely on the edge of your seat exhilarating finish!

In the 20 lap segment number one race William Clyde Elliott, Jr., aka Chase Elliott, was the dominate car for nearly all of the 20 lap segment.  As the race wound down, e had a large lead when a yellow flag flew with just five laps remaining.  The restart began with just two laps left in the race and the tone and the excitement would really ramp up.  With Chase Elliott leading the field to the green it looked like the victory was his, and he would transfer to the All-Star race easily!

However, there was another driver who had something to say about the finish of the race, Trevor Bayne.  Bayne took the green flag, drove his car deep into the turn, threaded the needle between two race cars, and emerged in second place rolling down the back straight.  Bayne continued his strong run on the leader and got up beside him as they took the white flag.

The excitement ramped up significantly as Bayne was door-to-door diving into turn three and staring at the checkered flag. Coming off of turn four it was a drag race between Bayne and Elliott for the victory.  As the two crossed the finish line Bayne edged Elliot by a hair for the victory and advanced into tonight’s All-Star race.

In 20 lap segment number two the dominate race car was that of “The Biff”, Greg Biffle!  The Rousch-Fenway Racing driver made it two-for-two for the RFR camp, winning that segment going away.

In the final segment, a 10 lap shootout, again the excitement level ratcheted up!  But this time the exhilaration level went off scale high!

Chase Elliott took on four “fresh feel goods”, better known as Goodyear Eagles, and started deep in the field for this 10 lap shootout. But from the drop of the green flag Elliott made his way though the field like a warm knife through butter.  With just two laps to go Elliott had maneuvered his race car to a position that allowed him to latch onto the leader, Kyle Larson’s, rear bumper.

The last lap was enough to get you up an off of your seat at the race track or your in your “man cave”!  Elliott had worked the low line in turns one and two to get beside Larson only to slip back to his rear bumper.  In turns three and four Larson gave Elliott the high side, figuring it was going to be easier to defend to the checkered flag.

As both of the cars exited turn four Elliott was able to get door handle to door handle with Larson and the drag race was one.  not only was the drag on, the beating and banging dramatically increase!  As they crossed the finish line it was Larson the victor and Elliot second by a whisker, pinning Elliott between his car and the fence all the way to the checkered flag!

Even though Elliott did not win the segment to transfer to the Sprint All-Star race this evening, he did win the fan vote to transfer. So with a little cosmetic body work on the Elliott’s car, he will be making his first All-Star start in just a few hours! 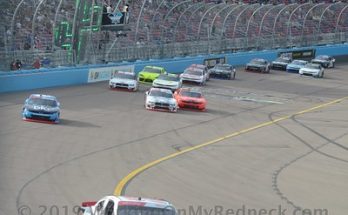 Preview of The Contender Boats 250