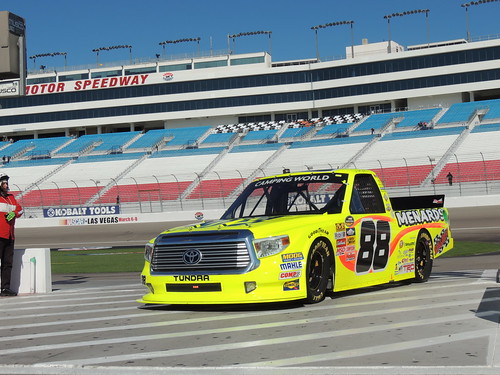 (WOMR file photo)
Matt Crafton had a lot to overcome on Saturday — a 17th-place starting position and a difficult pit stall that cost him dearly in the early stages of Saturday’s North Carolina Education Lottery 200 at Charlotte Motor Speedway.

But after 134 laps, Crafton was 5.748 seconds ahead of second-place Kyle Busch, winning the race and extending his series lead to 12 points over seventh-place finisher Timothy Peters. In fact, the two-time champion won consecutive races for the first time in his NASCAR Camping World Truck Series career, going back-to-back in successive weeks at Dover and Charlotte.

Even though it took Crafton more than half the race to get to the front, he sensed the quality of his ride from the drop of the green flag.

“Then we fell back to the 20s (after pit road issues) at that point and we started driving back through them and I was like, ‘Oh, my goodness, these boys are in trouble today.’ ”

The victory was the 13th of Crafton’s career, but despite the wide margin of victory, his No. 88 ThorSport Racing Toyota didn’t take the lead for the first time until Lap 80, when Crafton tracked down Peters and passed him for the top spot.

After starting mid-pack, Crafton worked his way forward during the first run but had major issues on pit road, first sliding through his pit box and later getting blocked in his stall. The miscues forced Crafton to pass a gaggle of cars, but by Lap 78 he was fourth for a restart after Christopher Bell’s spin off Turn 4, and two laps later, Crafton had the lead.

The advantage grew to more than 8.5 seconds before a cycle of green-flag pit stops for fuel trimmed Crafton’s winning margin in the closing laps.

Johnny Sauter did an extraordinary job of saving fuel and rolled home third behind Crafton and Busch. Tyler Reddick and Matt Tifft, the latter recently named to the 2016-17 NASCAR Next class, were fourth and fifth, respectively, both on fuel strategy.

Spencer Gallagher, Peters, Bell, Daniel Hemric and polesitter William Byron completed the top 10.
Busch led 27 laps in the early going but suffered a suspension part failure that caused the handling of his No. 18 Tundra to tighten up. Nor did it help that Busch’s team was penalized for an uncontrolled tire during a pit stop on Lap 68, forcing the driver to restart at the rear of the field on Lap 71.

“Once we got back in traffic, it just got super, super tight,” said Busch, whoseKyle Busch Motorsports organization also owns the trucks driven by Bell, Byron and Daniel Suarez. “Something broke, and after that, it was just laying on the splitter.”

Even though the race was more than 18 hours delayed to due the rain that has plagued the Charlotte area for the past two days, it was well worth the wait!