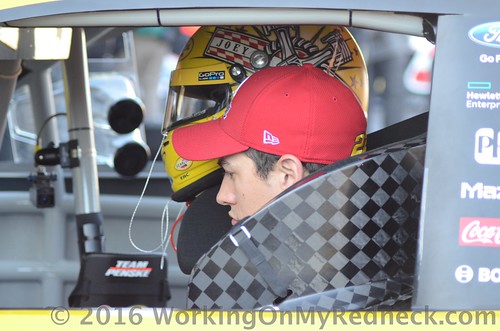 Here is how the wild and weird evening unfurled for the Sprint All-Star race tonight.

Right behind him was  Brad Keselowski in the No. 2 Team Penske Ford.

Rounding out the top five were Kyle Busch in the No. 18 JGR Toyota, Kevin Harvick in the No. 4 Stewart-Haas Racing Chevrolet and Chase Elliott in the No. 24 Hendrick Motorsports Chevrolet. Harvick led a segment-high 22 laps.

With five laps to go, Jamie McMurray spun in Turn 2 to bring out the segment’s only caution. The caution came at a bad time for Matt Kenseth, who had yet to pit, forcing the JGR driver to lose a lap.

Kenseth and crew chief Jason Ratcliff seemed at a loss over the scanner. The rules stipulated that Kenseth had to put under green in Segment 1. Because he had not pitted when the caution came out with just four laps to go in the segment, he was forced to pit under yellow.

Right behind him was Brad Keselowski in the No. 2 Team Penske Ford.

Rounding out the top five were Dale Earnhardt Jr. in the No. 88 Hendrick Motorsports Chevrolet, Joey Logano in the No. 22 Team Penske Ford and Kurt Busch in the No. 41 Stewart-Haas Racing Chevrolet.

A caution on Lap 64 was thrown for a weeper on the track. During this period, Kevin Harvick brought his car to pit road to fix an issue under the hood. “I think you might have a pump problem,” crew chief Rodney Childers told Harvick over the team’s radio.

Shortly after the ensuing restart, Chase Elliott sparked a wreck by slowing to pit and stacking up the cars behind him. Tony Stewart, in his final Sprint All-Star Race, saw his No. 14 Chevrolet destroyed, along with Matt Kenseth’s No. 20 Toyota andKasey Kahne’s No. 5 Chevrolet — all of which set the stage for the final 13-lap shootout.

But in segment three, the big money segment, the No. 22 Team Penske driver, Logano, drove through the field on the final restart to pick up his first All-Star Race victory in his sixth attempt.

Finishing behind him was his Penske teammate Brad Keselowski in the No. 2 Ford.

Rounding out the top five were Dale Earnhardt Jr. in the No. 88 Hendrick Motorsports Chevrolet, Carl Edwards in the No. 19 Joe Gibbs RacingToyota and Kurt Busch in the No. 41 Stewart-Haas Racing Chevrolet.

Kyle Larson appeared to be set to pick up his first All-Star win, but got loose in the final laps after battling with Logano. possibly cutting down a tire, getting into the fence, and that allowed Logano pass his No. 42 Chip Ganassi Racing Chevrolet for the win. “Young Money” finished 16th.