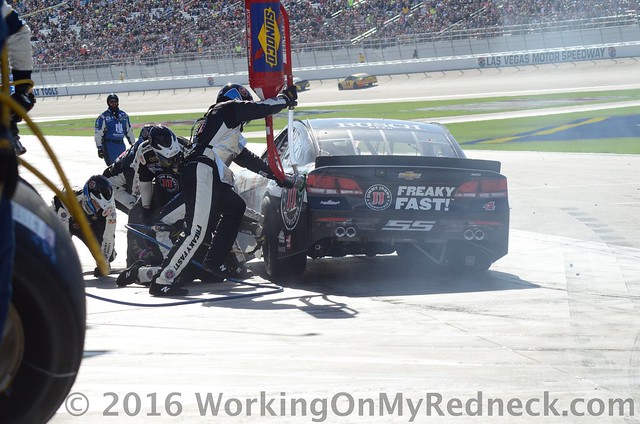 Harvick joined SHR in 2014 after 13 Sprint Cup seasons and his impact with the organization was immediate. In his debut year with SHR, the Bakersfield, California-native scored eight poles, won five races and led 2,137 laps en route to his first Sprint Cup championship. Harvick’s title defense in 2015 was incredibly strong, as he won three races and earned career-best numbers in top-fives (23), top-10s (28) and laps led (2,294) before finishing second in the championship. Harvick already has a win, five top-fives, nine top-10s and 688 laps led in the 12 Sprint Cup races run this season.

“It was a big decision to join Stewart-Haas Racing and it has turned out to be my best decision,” said Harvick, who has won nine of his 32 career Sprint Cup victories with SHR. “I came to Stewart-Haas Racing to win championships. We have one, but that only made us hungry for more. I’m very happy to have my future secure with a team so dedicated to winning.”

Harvick will continue to drive the team’s No. 4 entry and remain paired with crew chief Rodney Childers, who signed a multiyear contract extension last June.

“Kevin’s results speak for themselves, and in addition to those numbers, he brings a presence to our team that makes everyone want to work harder,” said Tony Stewart, co-owner of SHR with Gene Haas, founder of Haas Automation, the largest CNC machine tool builder in North America. “Kevin Harvick has made Stewart-Haas Racing a better team and he will continue to be an integral part of our future.”

Stewart earned SHR its first Sprint Cup championship in 2011, with Harvick bookending that title in 2014. SHR is one of only five active Sprint Cup teams with multiple premiere series titles.

“When you have talented people who consistently deliver results, you hold on to them,” Haas said. “Kevin Harvick is an exceptional talent and we’re very proud to have him a part of Stewart-Haas Racing for years to come.”

One important question that needs to be answered is what will Harvick do about his XFINITY ride with JR Motorsports, a Chevy, next year?

Nevertheless, it is now official and all of the rumors that have crept out of the garage area can now be quelled!  Harvick will be driving a Ford for SHR next year and for the foreseeable future!