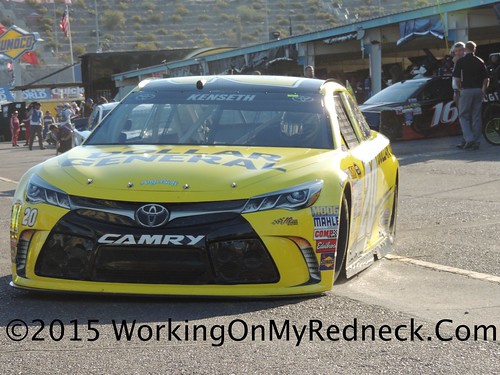 Matt Kenseth’s luck took a turn for the better, after Jimmie Johnson’s No. 48 Chevrolet took a turn that wrecked half the field in Sunday’s AAA 400 Drive for Autism at Dover International Speedway.

In a thrilling 35-lap run to the finish that featured Kyle Larson and Chase Elliott in hot pursuit of Kenseth – and of each other – Kenseth manhandled a loose race car to the stripe, arriving .187 seconds ahead of Larson to win his first NASCAR Sprint Cup Series race of the season.

The victory added to the mojo of Joe Gibbs Racing, which has now won five of the last six Sprint Cup events and seven of 12 this season. Kenseth is the fourth JGR driver to collect a win this season, all but assuring the full roster will compete in the Chase for the NASCAR Sprint Cup.

The victory was Kenseth’s third at Dover and the 37th of his career. It was also the 135th Sprint Cup win for Gibbs, tying the organization with Roush Fenway Racing for third on the all-time list.

Bitten by ill fortune despite having excellent speed in his No. 20 Toyota this season, Kenseth picked up only his second top five of the year.

“We had a good car today. I thought we were competitive and there were a few guys at different parts of the race that were a little bit better and Kyle gave me all I wanted at the end – and then some. We were fortunate to be able to hold him off.”

Kenseth’s victory charge had to wait until a massive 18-car wreck at the start/finish line after a restart on Lap 355 thinned the field. Ten-time Dover winner Jimmie Johnson had taken the lead on pit road with a two-tire stop, but a freakish transmission failure as he tried to shift gears ignited the crash.

Martin Truex Jr., who had maneuvered his way into the outside lane for the restart by letting Carl Edwards exit pit road in third place, plowed into Johnson’s Chevy, turning it sideways. Harvick then clobbered Truex from behind, as cars bounced off each other like pinballs.

After a red-flag period of 11 minutes, 22 seconds, the race restarted on lap 360, with Kenseth leading. But on the restart lap, contact from Larson’s No. 42 Chevrolet sent Edwards’ No. 19 Toyota spinning hard against the inside wall.

That set up the final restart on Lap 366, with Kenseth and Larson coming to the line side-by-side. On Lap 381, Elliott passed Larson for second but surrendered the position in traffic three laps later. During the final five laps, Larson pulled alongside Kenseth but couldn’t complete the pass from the inside lane.

“I had gotten close to his bumper a couple times,” Larson said. “I may have even got into him once. I didn’t want to do anything dirty. I respect Matt Kenseth a lot. He’s definitely, in my eyes, the cleanest racer out there. He always races me with respect. I try to do the same with him.

“So I was just going to try and race him as hard as I could without getting into him to beat him. He’s sitting in Victory Lane and I’m not, so maybe I need to do something a little bit different, but nothing crazy to take him out or anything… maybe use the bumper a little bit. I don’t know.

“It would be nice to be sitting here knowing I’m in the Chase. But (we’ll) keep working hard. We got a lot of points to make up if we don’t win a race before the Chase starts (Larson is 21st in the standings). But keep having runs like today and we shouldn’t have a problem.”

Note: Kahne’s No. 5 Chevrolet failed post-race laser inspection station and will be taken to the NASCAR Research and Development Center in Concord, North Carolina, for further evaluation. If penalties are warranted, they will be announced later this week.

Next on the schedule for the Sprint Cup teams will be the All-Star race from Charlotte.