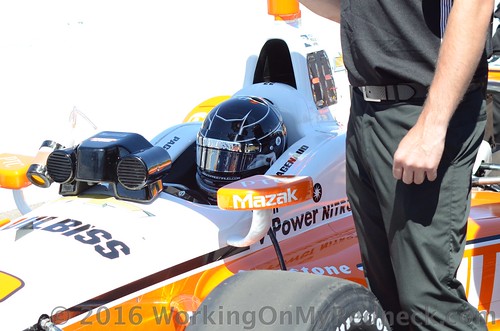 Simon Pagenaud won his third race in a row and his second Angie’s List Grand Prix of Indianapolis in a row, as well!

It was a dominating runaway performance for Pagenaud and his No. 22 Menards Team Penske Chevrolet!

Pagenaud led 57 of 82 laps on the 2.439-mile Indianapolis Motor Speedway road course, including the last 21, in earning his second Angie’s List Grand Prix win and seventh of his Verizon IndyCar Series career.

“The car was fantastic once again,” Pagenaud said. “The balance was perfect all race. When we were in the lead, we were cruising, doing what we could to save the tires. But the car was just fantastic to drive.

“What a day. Three races! It’s incredible to win three in a row like this and here in Indy for me, it’s very special. I lived here for nine years so this place is very special in my heart.”

Unofficially, Pagenaud extended his lead in the point standings to 76 points over Scott Dixon and 83 over race runner-up and teammate Helio Castroneves.

Pagenaud essentially won the race on Lap 63 with a lightning-quick 6.7-second four-tire and fuel pit stop that put him back on track in front of Castroneves, driving the No. 3 hum by Verizon Team Penske Chevy. From there, the Frenchman drove away to a 4.4748-second victory.

“It was very difficult on cold tires, so you could really make some ground on the pit sequence. After the first one I realized it was something to do with it. I let Kyle (Moyer, pit strategist) know. He already knew but that’s what we did the next two pit stops. We did the opposite and it worked. Thanks to my guys.”

Castroneves was still pleased, advancing 11 spots from the start to finish second.

“Great teamwork. Never give up,” Castroneves said. “The hum Verizon boys, everybody was really in sync. We never gave up because we knew we had issues and knew we didn’t have the fastest car, but we had the heart, man. We had the passion. We put it out there and had a little bit of luck, obviously, but it all blends together.”

James Hinchcliffe, Mayor of Hinchtown, had his best run of the season, starting and finishing third in the No. 5 Arrow Schmidt Peterson Motorsports Honda. Not only was it Hinchcliffe’s first top-five of the season, it was his third straight top-10 finish of 2016.

“We had a great car,” Hinchcliffe said. “Huge credit to everybody at Schmidt Peterson. The Arrow Electronics car was great all weekend. Missed the whole first practice, managed to put it on the second row (in qualifying). Got caught up on some of the restarts there but the guys were awesome in the pits. We were way quicker than Helio but just didn’t have enough to get by him. Great result.”

Graham Rahal came from 24th starting position to finish fourth in the No. 15 Steak ‘n Shake Honda, while Chip Ganassi Racing’s Charlie Kimball was fifth in the No. 83 Tresiba Chevrolet.

Even though he fell back in the latter part of the race, Conor Daly still had a great run, leading 14 laps and finishing sixth in the No. 18 Jonathan Bury’s Hospitality Honda.

Pagenaud became the first driver to win three races in a row since Dixon did so at Pocono Raceway and the streets of Toronto doubleheader in 2013. It also delivered the 181st Indy car win for Team Penske, which is celebrating its 50th anniversary this year.

Just like last year’s IMS road course race, the event got off to a rough start when the field went into Turn 1. Dixon moved to his left in the No. 9 Target Chip Ganassi Racing Chevy and didn’t see teammate Tony Kanaan in the No. 10 NTT Group Chevy. Kanaan tried to avoid Dixon but instead got into the No. 11 Team EUROPA – KVSH Racing Chevrolet of Sebastien Bourdais, with both cars ending up against the outside retaining wall.

“I was just on my line and TK came across the track and that was it,” Bourdais said. Kanaan’s day was over but Bourdais managed to get back on track to record 20 laps for the day.

Check out the unofficial results of the Angie’s List Grand Prix of Indianapolis.

Next up for the Verizon IndyCar Series is the historic 100th Running of the Indianapolis on May 29. Practice begins Monday on the 2.5-mile IMS oval, with qualifying May 21-22. 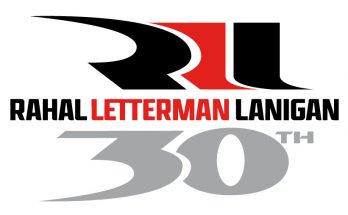