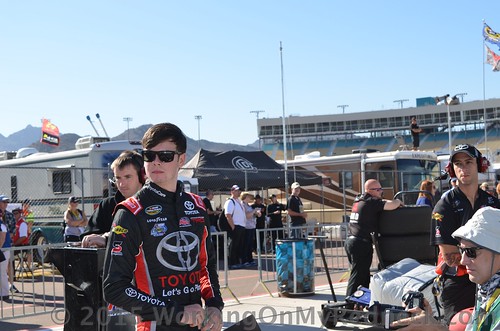 After finishing second in his XFINITY Series heat race earlier Saturday at Dover International Raceway, Jones was not all that optimistic about his chances of winning the Ollie’s Bargain Outlet 200 main event that followed.

As it turned out, he need not have worried at all.

Jones ended up pulling away from the field on the final restart with five laps to go to and won by 1.434 seconds over Darrell Wallace Jr.
Jones did so despite being one of only a handful of cars that decided to stay on the track, forgoing the chance for a final pit stop after Brendan Gaughan’s car spun and brought out the last caution with 11 laps to go.

The 120-lap main event followed two heat races, which were won by Justin Allgaier and Ty Dillon, respectively. Those victories in the 40-lap heat races earned the pair starting spots on the front row, but guaranteed nothing more.

So on the final restart with five laps to go, it was Jones who took off with the lead in his No. 20 Joe Gibbs Racing Toyota, leaving Allgaier, who started second on the restart in his No. 7 JR Motorsports Chevrolet, in his dust!

Pretty much the exact opposite occurred in the closing laps of the heat race involving Allgaier and Jones, with Allgaier leaving Jones in his wake for the preliminary win.

In the long run, that meant far less than the win scored by Jones.  Jones grabbed another race victory and a cool $100,000 for the day!

“I wasn’t too sure about it after the heat race,” Jones admitted of his winning car. “But it turned out to be all right.”

Jones led a race-high 76 laps. His toughest competitor over the last third of the race was Alex Bowman, who led 33 laps and ended up finishing third in the No. 88 JR Motorsports Chevy.

It an impressive run for Bowman in his first start of the season in the series. But as good as he was on long runs, he was not up to matching the speed of Jones on short runs like the one that decided the race — although he did move up from sixth to third following the final restart.

Check out the unofficial results of the Ollie’s Bargain Outlet 200.