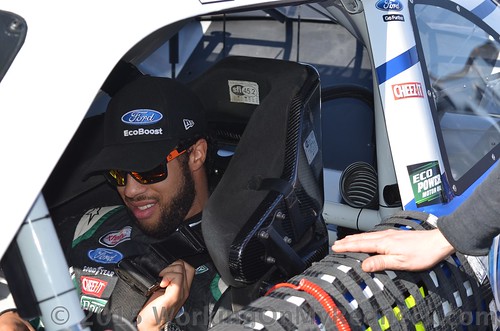 DOVER, Del. (May 14, 2016) – Bubba Wallace, driver of the No. 6 LoudMouth Exhaust Ford Mustang, recorded a career-best second-place finish on Saturday afternoon in the NASCAR XFINITY Series event at Dover International Speedway. Wallace ran inside the top five for much of the afternoon despite having to run a backup car following a practice incident on Friday and charged into the second position on the final restart of the day with five laps remaining.

“Our team never gave up,” said Wallace after the race. “It is really a credit to my guys right here for really thrashing this thing. It is unfortunate when you do have to bring the backup car out but we never gave up and we worked really hard to get some speed in this baby. Finishing second with how this weekend started is amazing and I can’t say enough for how this team performed this weekend.”

Wallace took the green flag for the 120-Lap Main Event on Saturday from the 11th position after finishing sixth in the first 40-Lap heat race earlier in the afternoon. Wallace wasted little time moving forward when the race began, racing his way into the top 10 after one lap and into the top five for the first time on Lap 37. The driver of the LoudMouth Exhaust Mustang maintained his top-five track position until the first caution of the day came out on Lap 69.

During the caution, crew chief Seth Barbour called the Roush Fenway Racing driver to pit road for four tires and fuel, sending Wallace back out in fifth for the Lap 76 restart. When the race was back underway, Wallace settled into his sixth position and remained inside the top 10 until the caution came out once again on Lap 109.

Opting to stay out for track position, Wallace took the final restart on Lap 115 from fourth, the second-car on the outside-line.

In the closing stages, Wallace would fight his way into the second position and hold off a charging Alex Bowman to earn his career-best NASCAR XFINITY Series finish.

“I can’t thank LoudMouth Exhaust enough for coming on board,” added Wallace. “This is a good debut for them. They will be on our car in Charlotte. We will go have some fun in two weeks, a home track for us, and hopefully we can get one spot better.”