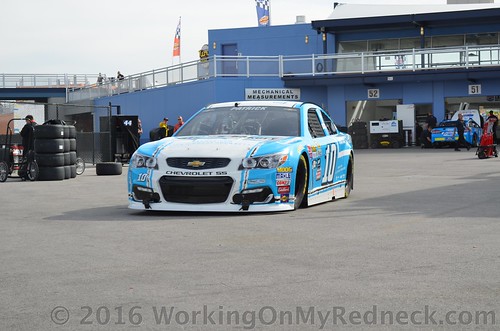 A gear failure sent Danica Patrick into a fiery spin, triggering a three-car accident that resulted in Tony Stewart and Jamie McMurray spinning in the oil left by Patrick’s car and hitting the wall extremely hard in the opening minutes of practice Friday at Dover International Speedway.

Stewart, who missed the first eight races this year because of a broken back, walked very gingerly after getting out of the car. He also walked out of the care center and up a short hill before getting in a golf cart.

Patrick said she was fine and that McMurray was nursing a sore elbow. She said she hoped Stewart, her teammate and boss at Stewart-Haas Racing, was OK.

“He walked out of the medical center,” Patrick said. “Only he knows how bad his back hurts when something happens to him. I’m sure any time you hit a wall and jolt it, he probably feels something. Hopefully if it’s something, it’s something that passes quickly.”

SHR competition director Greg Zipadelli said Stewart would get in the backup car for the remainder of practice.

“He said he was fine,” Zipadelli told ESPN.com.

Zipadelli said the Patrick car blew a rear-end gear and that SHR driver Kurt Busch experienced a vibration at the start of practice. The team plans to change gears in its other cars.

Patrick, Stewart and McMurray will have to go to backup cars. Because the crash occurred prior to qualifying, the drivers will be able to start where they qualify Friday afternoon.

“It shouldn’t even be a question whether or not tracks have SAFER barrier all the way around,” Patrick said. “It should be mandatory. It shouldn’t be a financial decision.”

Six-time Sprint Cup champion Jimmie Johnson said he assumed that every wall had a SAFER barrier at Dover but understood the philosophy that the drivers run up against the wall on the frontstretch at the track. He said drivers would adjust to a new groove if Dover added a SAFER barrier to that portion of the track.

“The outside wall doesn’t bother me too much that it doesn’t have the SAFER barrier on it,” Johnson said. “It’s not like a mile and a half where we have the D-shaped front straightaway and you actually get away from the wall and, if something went wrong, have a terrible angle at the wall.

“With all that said, I’d take a soft wall over a hard wall any day in any situation. … I’m not overly concerned here. I guess I understand why there isn’t on the frontstretch here.”

Kevin Harvick, an SHR teammate of Patrick and Stewart and an advocate for additional SAFER barrier at tracks, said even if it affected the racing groove that the barrier should be added to the frontstretch outside wall.

“We’ve put SAFER barriers in the groove at Darlington and it’s two and a half cars wide, so there’s really no excuse not to have it in my opinion. … Cars have hit in that spot, and there’s just no excuse not to have them there,” Harvick said. “We don’t wear our helmets and HANS devices for the impacts that are prepared for. We wear those things for the instances when those one-off things can happen like happened today.”

It is inexcusable that any of the NASCAR sanctioned race tracks would not have SAFER barriers the entire length of the inside and outside retaining walls!  If there is an area that is not covered by the SAFER barrier, it will not take long for a crash to find that spot.  Therefore, whether the groove shrinks or not the SAFER barrier is an absolute necessity at all race tracks!