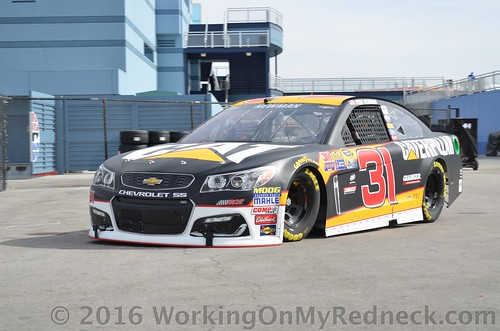 Newman signed a three-year contact to drive for the team beginning with the 2014 season. This is Newman’s third year with the organization.

No extension on Newman’s contract has been announced. With RCR at three cars and Ty Dillon, Childress’ grandson, on the path to move to Cup, the question is what RCR’s driver lineup will be next year if it doesn’t find sponsorship to expand to four cars.

“I’ll keep doing this as long as somebody wants me to do it and it’s fun doing it,’’ Newman said of his future.

Asked about next year’s driver lineup, Childress said: “We’re not looking at anything right now. We’ve got to focus and focus hard on trying to go out and win races. That’s our No. 1 focus right now.’’

Although Newman has yet to win at RCR, he finished second in the points in 2014 and was 11th last year. He enters this weekend’s race at Dover International Speedway 17th in the points.

He blew a tire late at Atlanta and finished 24th. A melted bead caused Newman’s tire to go down and he crashed at Phoenix, finishing 39th. He placed 28th at Talladega after being involved in a 21-car crash.

Other than those finishes, Newman has finished between seventh and 18th this season.

Newman, who has 17 career Cup wins, is focused on snapping his 99-race winless streak.

“That’s what we’re working on is winning races,’’ he said. “It’s important for our sponsors that we get at least one win and hopefully can knock off two or three once we make it in the Chase and have a successful season again.’’

Will winning change if he is back at RCR?

There is no doubt that Childress two grandsons, Austin Dillon and Ty Dillon, will occupy two of the available driver’s seats at the present three car team at RCR in 2017.  Additionally, it is quite obvious that RCR will continue to provide a race car for Paul Menard as well.  For those who are not in the know Menard’s father, John Menard, is a billionaire and the owner of the Menards chain of home repair supply stores located throughout the Midwest and can well afford his continuing full season sponsorship of his son. The price of that full sponsorship ranges in the $15-20+ million per year, well within John Menard’s financial capabilities!

With the above knowledge it seems intuitively obvious that Newman is the odd man out at RCR in 2017!  The next question is where will Ryan Newman land in 2017?