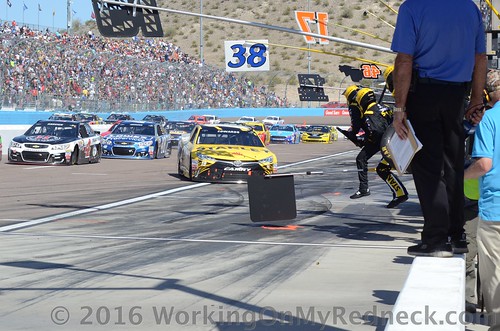 NASCAR today announced the 2017 schedules for its three national series, giving fans and stakeholders a significant head start in planning for next season’s thrilling slate.

A credit to unprecedented industry collaboration, specifically the five-year sanctioning agreement between NASCAR and its tracks, the sanctioning body finalized its 2017 schedules months ahead of previous years’ release.

The result: Three unique schedules featuring race tracks that have hosted record-setting races already this season, with the majority of the slate still remaining.

A notable change in the 2017 NASCAR Cup Series schedule includes a date swap between a track that just hosted one of the most competitive races in its history, and one that will showcase the lower downforce competition package this coming weekend.

Talladega Superspeedway, which last Sunday had the second-highest total of green flag passes for the lead ever recorded (213), will become the second race in the Round of 12 in 2017 (Oct. 15). Kansas Speedway will now become the third and final race in that round (Oct. 22).

“Announcing the 2017 national series schedules this early in the season is another example of the collaborative spirit across the NASCAR industry,” said Steve O’Donnell, NASCAR executive vice president and chief racing development officer. “It is an exciting time in NASCAR, with some of the most intriguing racing we’ve seen in years. With the 2017 schedule solidified, the industry can now concentrate on the remainder of this season, while planning for the future much earlier than in previous years.”

The NASCAR Cup Series 2017 schedule opens with The Great American Race, the Daytona 500 at Daytona International Speedway, scheduled for Sunday, Feb. 26. The season culminates with the NASCAR Cup Series Championship Race at Homestead-Miami Speedway on Nov. 19.

All races will air on either the FOX or NBC family of networks, MRN, PRN and SiriusXM NASCAR Radio.

See below for all three NASCAR national series schedules.