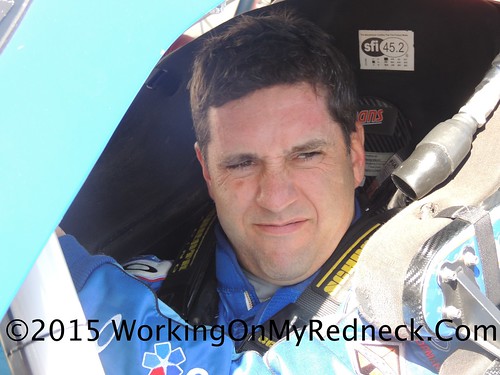 In a nail-biting final lap where there was more beating, banging, shoving and pushing than a riot, Elliott Sadler earned his first XFINITY Series win of the season at Talladega Superspeedway’s Sparks Energy 300 on Saturday. Sadler last saw Victory Lane in 2014, also at the Alabama track.

After a Lap 114 restart as the race went into overtime, defending race winner Joey Logano was in the lead.  However as the pack came out of turn four heading for the tri-oval  and the checkered flag, Sadler had a big run from a push, and was trying to figure out how to get around Logano.

Sadler’s first move was to go down low in the tri-oval and where Logano executed a strategic block on him.  Then Sadler quickly reversed course and headed up high, again Logano attempted to block Sadler’s advance.  However when Logano went to block the high move his world started to turn brown on!  When attempting the high blocking move the back end of Logano’s car stepped out on him and he went spinning, that is to say that Logano and his Team Penske Discount Tires No. 22 Ford careened head first into the retaining wall.  Then as the car rebounded off of the fence Logano received a vicious hit from Blake Koch that completely finish off his day.

Both cars sat poised near the start/finish line while NASCAR reviewed the finish.

As the officials reviewed all the video tape it appeared that Brennan Poole actually crossed the start/finish line first and would be declared the race winner.  But after reviewing all necessary information to find out who was in the lead with the yellow flag actually waved, NASCAR officials concluded that Sadler was leading at the time the caution came out.

After all of the review, Logano was scored as finishing 27th in the race!

The JR Motorsports No. 7 of Justin Allgaier came in behind Sadler’s No.1 for a second-place finish.

Rounding out the top three was Poole in his No. 48 Chevrolet — the first top-five finish of his NXS career.

The No. 51 of Jeremy Clements and the No. 62 of Brennan Gaughan were fourth and fifth, respectively.

Check out the unofficial results of the Sparks Energy 300.