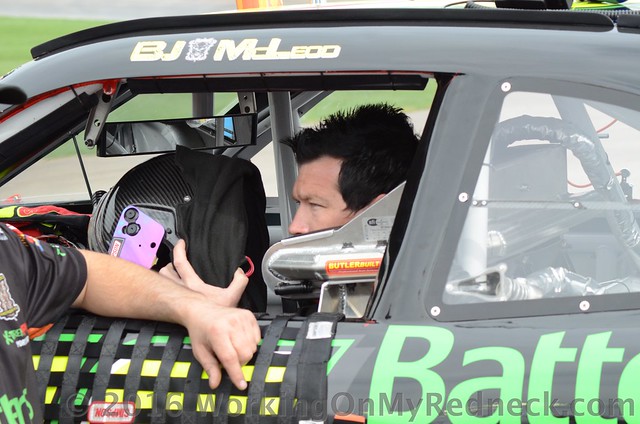 TALLADEGA, Ala. (April 28, 2016) – – So far, NASCAR XFINITY Series (NXS) driver B.J. McLeod is satisfied with the growth of his B.J. McLeod Motorsports (BJM) team eight races into this season.

However, McLeod knows that Saturday’s Sparks Energy 300 can be a huge opportunity for his growing team to compete with the big teams and earn a strong finish in his Talladega (Ala.) Superspeedway debut.

Restrictor plate racing rolls out three times a year in the NASCAR XFINITY Series, but as McLeod knows, the power of the draft serves as a great equalizer to level the playing field in a race which is accustomed to delivering thrilling moves, daredevils saves and the probability of the “Big One.”

Despite his limited experience in the draft, McLeod competed in the season-opening QQQ PowerShares 300 at Daytona (Fla.) International Speedway, where 120 laps of competition proved not only to be beneficial, but an eye-opener as well.

“We had a top-25 finish in my restrictor plate debut at Daytona, so that was solid, but we’re looking for a little bit more this weekend at Talladega,” offered McLeod. “I had a blast at Daytona though. I learned a lot about the draft, who I could work with, what my car could do, the list goes on and on.”

While McLeod has never actually competed at the 2.66-mile superspeedway, he’s embracing the opportunity to take in another new track in his first full season of competition, while also focusing on building a platform around the BJMM name.

“In Daytona, I was owner and driver, and this weekend at Talladega, I can be a little more of the driver,” he said. “We’re still building and growing our team, but we know that while we continue to make gains on and off the track, we need to produce some good finishes. Restrictor plate tracks allow us to do that in more ways than one. I’m excited about the weekend ahead.”  Another reason McLeod has reason to be excited about the weekend is bringing another new marketing partner to the table.

For Saturday’s 113-lap event, B.J. McLeod Motorsports welcomes Triple R Containers as the primary marketing partner on the team’s No. 78 Ford Mustang for the second restrictor plate race of the season.

“We’ve been very fortunate to welcome several new sponsors at B.J. McLeod Motorsports this season and to have the support of Triple R Containers is a big deal to us,” the driver of the No. 78 Triple R Containers Ford Mustang added. “They are new to our XFINITY Series program, but we are hoping that we can have a good showing and it could lead to potentially more races as the season motors on.”

Like last weekend, B.J. McLeod Motorsports in partnership with Rick Ware Racing will have Travis Kvapil aboard their No. 15 Ford Mustang for his second XFINITY Series race of the season. Last weekend, Kvapil qualified 30th and finished a respectable 25th in his first XFINITY race in nearly seven years.

“We’re real happy with the job Travis did at Richmond,” said McLeod. “No doubt his experience and expertise is making our program stronger. For Talladega this weekend, I think we can work together and stay in the lead draft and make our move when it’s time to go.”

Veteran industry crew chief George (David) Ingram Jr. will call the shots for the No. 78 Main Gate Ford Mustang for the seventh race of the 2016 NASCAR XFINITY Series season.

For more on B.J. McLeod, please visit his official Facebook page, while also visiting the team’s new website atBJMcLeodMotorsports.com. Additionally, the team is growing their presence on Twitter, with the team’s new account @teamBJMcLeod. McLeod also utilizes his personal twitter too, @BJMcLeod78.