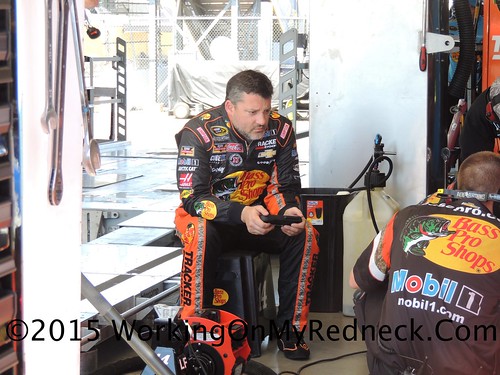 Well ol Smoke has made news twice in one day!  Earlier on Thursday, April 21, he announced that he had been cleared by his doctors and NASCAR to return to racing.  Now with his weekend statements regarding the loose lug nuts, loose wheels, and the approach that NASCAR has taken in that area, his checkbook is somewhat lighter today!

Tony Stewart has been fined $35,000 by NASCAR, apparently for an angry rant about loose wheels Wednesday.

It’s one of several behavioral penalty amendments that NASCAR announced in February. Senior vice president of racing operations Jim Cassidy then told reporters at Daytona that NASCAR would react to negative comments directed toward the series or NASCAR Chairman and CEO Brian France.

“That’s not new,’’ Cassidy said. “We’ve been pretty clear as it relates to taking on the sport versus taking on a call and so what you’ll see that is also part of it. You’ll also see part of it taking on media members, taking on fans, taking on partners. It’s an effort to state entirely what we expect of our members.’’

Stewart already had made news Thursday morning when he announced he would make his 2016 season debut at Richmond International Raceway after missing the first eight races with a fractured back. NASCAR also granted Stewart a waiver for playoff eligibility, meaning he would qualify in the Chase for the Sprint Cup if he were to win a race and finish in the top 30 in points through 26 races of the regular season.

“I would say this: Nobody has led, done more and achieved more in safety than we have,” France said. “It is a never-ending assignment and we accept that. We do take offense that anything we do is somehow leading towards an unsafe environment, so he’s wrong on that. And we’ll deal with that later.

“Safety .. that’s the most important thing we have to achieve, and we’re going to continue to do that.”

Here’s the full text of what Stewart said in his media session Wednesday when asked by NBC Sports and X about the recent issue of teams skipping lug nuts to improve the speed of pit stops.

Q: Rodney Childers was on SiriusXM this morning talking about the loose wheel phenomenon. He’s kind of frustrated because he feels the No. 4 team is erring on the side of caution on safety and tightening five lug nuts every time. Meanwhile, he’s seeing other teams take chances and beat his out of the pits and having loose wheels that potentially could be safety problems. Do you have any thoughts on that?

Stewart: “It’s something I’m really battling inside, and I haven’t talked about much, but I’m beyond mad. I’m P.O.’d at NASCAR about it, to be honest. For all the work and everything and all the bulletins and all the new stuff that we have to do to superspeedway cars and all these other things that they want us to do for safety, but we can’t even make sure that we put five lug nuts on the wheel. It’s not even mandatory anymore. It used to be mandatory. Now all the sudden, it’s a smart thing to not dictate. I mean, you don’t have to have but one on there if you don’t want. It’s however many you think you can get away with. So we’re putting the drivers in jeopardy to get track position at the end. It’s not bit anybody yet, but I guarantee you that envelope is going to keep getting pushed until somebody gets hurt. You will not have heard a rant that’s going to be as bad as what’s going to come out of my mouth if a driver gets hurt because of a loose wheel that hurts one of them. With all the crap that we’re going through with all the safety stuff, and for them to sit there and sit on their hands on this one. If you only want us to put one lug nut on, then give us hubs that have one lug nut like an IndyCar or a Formula One car, and then we don’t have to worry about it. But this is not a game you play with safety, and that’s exactly the way I feel like NASCAR is treating this. This is not the way to do this.”

Stewart: “Yeah, absolutely. When they made the decision that they weren’t going to monitor it, that was the big mistake that they made right off the bat. When you preach about safety, why would you sit there and have cars that are running 200 mph at the end of a straightaway that don’t have all the lug nuts on the wheel that should be on it? If they want to design a new hub that has three lug nuts or one lug nut, that’s fine. But make sure it’s safe and make sure that it’s the same for everybody. We shouldn’t be playing games with safety to win races. It should be out-performing the other teams, not jeopardizing drivers’ lives by teams putting two lug nuts on to try to get two more spots off pit road.”

Stewart: “I don’t know. We didn’t make the change to begin with. It’s not our responsibility. That’s their responsibility. We did it for how many years in the sport – 50-plus years? Sixty-plus years? And now in the last two years now we don’t have to do that. Last year, it started. This year, you see the problem getting worse. Well if a problem is getting worse like that, where do you think the bottom of that trend is going to happen? It’s going to happen when somebody gets hurt, and that’s going to be one of the largest black eyes I can see NASCAR getting when they’ve worked so hard and done such a good job to make it safe. In this one particular area, they are totally dropping the ball on, and I feel like really made a very grossly bad decision on.”

Well it is good to see that Stewart still has the propensity to shoot himself in the foot despite this being his last year to race in the Sprint Cup series.  He has not even gotten back into the cockpit yet and will have to split with NASCAR some of his paycheck this weekend!