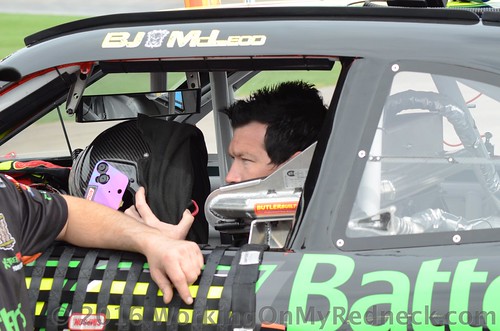 And for the second time in as many weeks, the cars and stars of the XFINITY Series will dice it out in two heat races which will determine the starting lineup for the main event, as well as the opportunity to win $100,000 bonus in XFINITY’s Dash4Cash incentive.

For McLeod, a successful entrepreneur and avid short track racer by trade, this weekend’s event is one that he can’t wait to compete in.

“I’ve never been to Richmond, but of course, I can’t wait to get there,” offered McLeod, one of the few drivers and owners in the XFINITY Series this season. “Last Saturday I made my Bristol Motor Speedway debut and learned a lot. I know there’s a vast difference between Bristol and Richmond, but we’re confident in the direction of our team, especially on the smaller tracks and look forward to a solid performance at Richmond.”

Like Bristol, McLeod and his B.J. McLeod Motorsports team welcomes Main Gate as the primary marketing partner for the eighth XFINITY Series race of the season.

Eight years ago, during Florida’s worst ever housing slump, Main Gate Enterprises began with the office in the owner’s home and the equipment in an old barn on an abandoned dairy farm. In 2016, the company will be operating out of a 35,000 square foot facility in Wauchula, Fla.

Main Gate builds its reputation on exceptional service, attentive customer service and proudly being the only gate company in Florida that has both a state licensed building contractor, as well as a state licensed electrical contractor on staff.

“We’re very fortunate to have the support of Main Gate again this weekend,” added McLeod. “They have been a great supporter of mine and I’m very happy that they have made the move up to the XFINITY Series with us. Like Bristol, we just want to have another solid showing and make some gains in the right direction.

“We had a pretty good car at Bristol. We played it safe during qualifying and the heat race, but when the main event rolled around – we knew we had something that could contend for a top-20 finish. Unfortunately, we made a mistake by not taking the waive around – and that hindered us from having a better show. Still, we learned from it and we’re moving on and ready to do battle at Richmond.”

As for the heat race, McLeod utilizes the short races to help prepare for the main attraction.

“Of course, we want to do well in our heat race, but we also try to use it to our advantage,” he explained. “We may not always have the best opportunity of winning the heat, but we can use the session to get our car handling better for the race. Like Bristol, we’ll try and do the same this weekend.”

To help McLeod for his RIR debut, NASCAR Sprint Cup Series star Travis Kvapil will be on-hand in a collaborative effort between BJMM and Rick Ware Racing in the No. 15 CorvetteParts.net / Keen Parts Ford Mustang.

“We’re thankful for this opportunity to work with Travis,” offered McLeod. “With both teams continuing to work hard to be better and better on the track with every passing race, working with someone like Travis who has a massive amount of experience can be something that we can lean on for not only this weekend, but hopefully moving forward too.”

Veteran industry crew chief George (David) Ingram Jr. will call the shots for the No. 78 Main Gate Ford Mustang for the seventh race of the 2016 NASCAR XFINITY Series season.

For more on B.J. McLeod, please visit his official Facebook page, while also visiting the team’s new website atBJMcLeodMotorsports.com. Additionally, the team is growing their presence on Twitter, with the team’s new account @teamBJMcLeod. McLeod also utilizes his personal twitter too, @BJMcLeod78.

To learn more about Main Gate, please log onto Main-Gates.com.