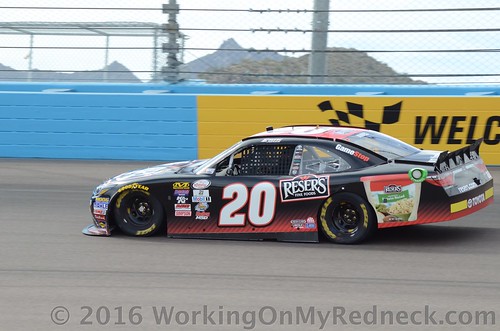 With the level of talent that Erik Jones puts on display when he is behind the wheel of a Joe Gibbs Racing Toyota, it was only matter of time before he’d get his first win of the season. Now with a victory (Bristol) in the books, Jones has all but punched his ticket to the seven-race NASCAR XFINITY Series Chase.

A win in the first 26 races all but guarantees a driver entry into the NASCAR XFINITY Series Chase, provided the driver is in the top 30 in points and has attempted to qualify for each race. Drivers who win two Dash 4 Cash bonuses are also all but guaranteed a Chase berth.

The NASCAR XFINITY Series Chase kicks off at Kentucky Speedway on Sept. 24, and will feature 12 drivers and two elimination rounds, with four drivers competing in the Championship 4 at Homestead-Miami Speedway.

The first round, called the Round of 12, consists of the races at Kentucky, Dover and Charlotte. All drivers will start with their points adjusted to 2,000, with three additional bonus points added to their total for each win in the first 26 races. If a driver wins a race in the Round of 12, the driver automatically advances to the next round. The remaining available positions (1-8) that have not been filled by wins will be filled on points.

Each driver who advances to the Round of 8 (Kansas, Texas, Phoenix) then will have their points reset to 3,000. Drivers who win a race in the Round of 8 automatically advance to the Championship 4. The remaining available positions (1-4) that have not been filled by wins will be filled on points.

The four drivers who advance to the Championship 4 at Homestead will have their points reset to 4,000. The highest finishing Championship 4 driver will be crowned the NASCAR XFINITY Series champion.

Jones now focuses his attention to Richmond, looking to turn his winning ways into a trend. The Byron, Michigan native has made two starts at RIR, posting two top fives and an average finish of 4.5.  He could easily add another victory this week at RIR.