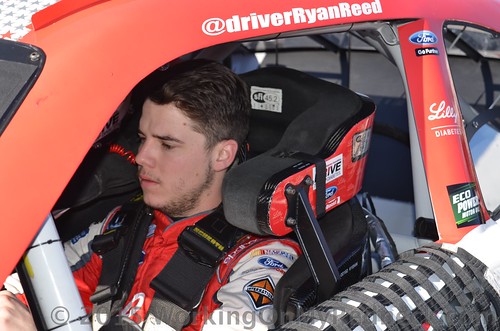 Roush Fenway Racing driver Ryan Reed will make his 80th career NASCAR XFINITY Series (NXS) start this weekend at Richmond International Raceway (RIR), which was the site of his first NXS start in 2013.

“Richmond will always be special to me because I remember the sights, sounds and how I felt making my first start there three years ago,” said Reed. “It’s hard to believe it’s been 79 races since then, but that day will never leave my mind.”

Reed, who was 19 years old at the time of his first start, ran in the top 10 for the majority of the day, ultimately finishing the race 16th. The second time Reed returned to RIR, he earned a then career-best ninth-place finish.

Now 22 years old and in his third full-time season of NXS competition, the Bakersfield, Calif. native considers RIR one of his favorite tracks.

“I would love to win at RIR,” said Reed. “It’s so similar to the D-shaped ovals I grew up racing late models on, especially Kern County Raceway Park back home in Bakersfield. It’s probably our most true short track on the NXS schedule. There’s a lot of braking and a there’s a premium on forward drive, which makes it a ton of fun.”

Reed’s crew chief, Phil Gould, has shown success atop the pit box at RIR. In Gould’s six races as a crew chief at the track, he has amassed three top-five finishes, two pole awards and a total of 285 laps led. Gould, who will celebrate his birthday on Saturday, likes the complexity of RIR.

“I really like Richmond because it’s a short track, but also has some of the speed and handling characteristics of an intermediate track,” said Gould. “This mix makes for a special challenge for crew chiefs as we have a lot of options on setup and adjustments throughout the race.”

The heat-race format for the NASCAR XFINITY Series returns this weekend at RIR as part of the Dash 4 Cash program. Reed and the team will qualify on Saturday morning at 9:35 a.m. ET to determine their starting position in either heat race. After a 35-lap heat race, the field will join for a 140-lap main event, with the top finishing XFINITY Series driver that qualified for the $100,000 Dash4Cash prize in their heat race taking home the extra change.

Tune in to watch Reed and the rest of the NASCAR XFINITY Series take the green flag from RIR on Saturday, April 23 at 1:45 p.m. ET on FS1.