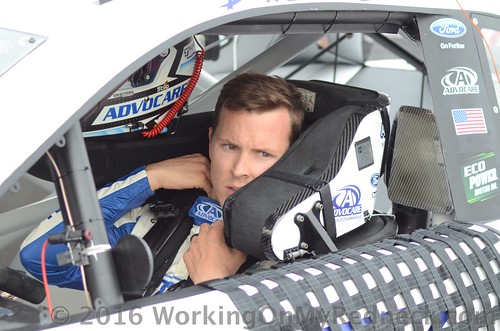 Knoxville native Trevor Bayne, driver of the Roush-Fenway Racing No. 6 AdvoCare Ford Fusion, overcame a pit road penalty and damage to the nose of his Roush Fenway Ford to earn a fifth-place finish in the NASCAR Sprint Cup Series (NSCS) event at Bristol Motor Speedway on Sunday afternoon.

“It was a lot of battling back,” said Bayne after the race. “We went through a lot of adversity to get there, but we just didn’t give up.  We had a really good AdvoCare Ford.  That’s what paid off.  You can’t come back if you don’t have good race cars and we’ve got that now.  I need to minimize my mistakes going forward, but we were able to make mistakes and get back to a top-five finish. I’m just really proud of everyone on this team.”

Bayne took the green flag for the 500-Lap event from the 10th position after advancing to the third round of knockout qualifying on Friday afternoon. Bayne maintained his top-10 track position throughout much of the early portion of the event, running as high as eighth just prior to the caution coming out on Lap 146.

During the caution period, crew chief Matt Puccia decided to keep Bayne on the racetrack in an attempt to gain track position. Unfortunately, a commitment line violation forced Bayne to pit road and shuffled him back to the 28thposition for the ensuing restart. TB never gave up following the penalty and rejoined the top-20 following a Lap 193 caution.

Bayne continued to climb forward from there, racing his way up to 12th before sustaining damage to the nose of his AdvoCare Ford during an incident on Lap 349. After pitting for repairs, Bayne returned to the track in 22nd but immediately moved forward once the race resumed. The Roush Fenway Racing driver worked his way back into the top 15 by Lap 428 and then utilized a Lap 460 restart to rejoin the top-10.

In the closing stages, Bayne battled with Roush Fenway teammates Ricky Stenhouse Jr. and Greg Biffle for position inside the top 10 before the final caution of the afternoon came out on Lap 495.

Restarting sixth, Bayne took advantage of the outside-line to work into the top five and took the checkered flag in the fifth position. With that result, Bayne now trails the 16th and final position in the Chase for the NASCAR Sprint Cup championship standings by 10 points.

Next week NASCAR rolls up I-95 to the Richmond International Raceway.