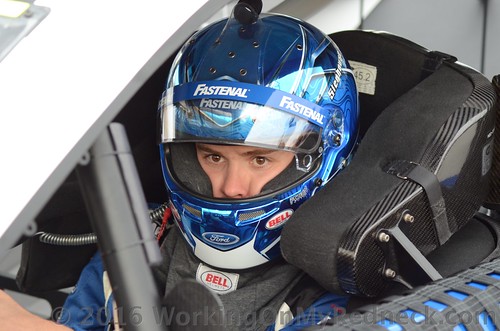 Ricky Stenhouse Jr. rebounded from an early spin to drive his Roush-Fenway Racing No. 17 Zest Ford to a 16th-place finish in Sunday’s Food City 500 at Bristol Motor Speedway.

“Every restart we were on the bottom,” said Stenhouse Jr.  “I thought we had a top-five car there at the end with speed, but we just couldn’t break out.  We never gave up, but we’ve still got a lot of work to do.”

After battling a loose handling Zest Ford in qualifying on Friday, Ricky Stenhouse Jr. started the 500-lap race in 32nd but quickly maneuvered his machine forward picking up 11 positions in the first 50 laps.

After the first pit stop, the 2013 NASCAR Sprint Cup Series (NSCS) Rookie of the Year reported the Zest Ford bottomed out causing his machine to jump out bringing out the second caution of the race.  The spin cost the two-time XFINITY champion a lap to the leaders.

With minimal damage to the Zest Ford, the Olive Branch, Miss. native was able to race his way into position to earn the Lucky Dog on lap 186 and get back on the lead lap.  Stenhouse restarted 26thand with a fast Zest Ford quickly made up lost track position.

As the race progressed, Stenhouse worked his way into the top 15 where he remained until the closing laps. On the final five lap shootout, Stenhouse lined up 11th behind teammate Greg Biffle on the bottom line.  With no openings to move up, the high line prevailed forcing Stenhouse to settle for a 16th-place finish.

Stenhouse and the No. 17 team travel to Richmond International Raceway for the NSCS race onSunday, April 24.