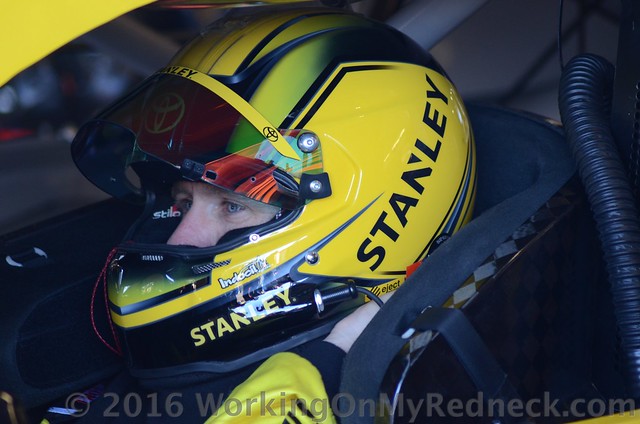 But while Edwards cruised to victory with the fastest car in the eighth NASCAR Sprint Cup Series race of the season, drivers behind him suffered a litany of troubles, populating the top 10 with the most unlikely array of competitors this season.

Matt DiBenedetto came home sixth, scoring a best-ever finish (and only the second top 10) for BK Racing. Clint Bowyer rallied from laps down to run eighth, his first top-10 and third lead-lap finish of the season.

Kevin Harvick, who had arguably the fastest car in the closing stages of the race, never got a chance to show it, because he kept drawing the inside lane for every restart. The speed at Bristol is in the outside lane, and Harvick ultimately ran seventh with a No. 4 Chevrolet that was much better than its finishing position.

Simply put, it was another wild, action-filled afternoon at Thunder Valley, but for Edwards, it was just an extension of what he and the No. 19 Toyota team have been accomplishing this season.

Edwards posted his seventh top 10 in eight races, climbed to second in the series standings (one point behind Harvick) and, first and foremost, all but assured himself of a spot in the Chase for the NASCAR Sprint Cup.

“It was a really great race for us,” said Edwards, who won for the first time this season, the fourth time at Bristol and the 26th time in his career. “It started on Friday well, started this winter building these cars. But the car was really fast in qualifying, got the first pit stall, and that meant a lot to the guys. They were just flawless on pit road. The car was really fast, and (crew chief) Dave (Rogers) did a good job of managing everything.

“We didn’t have any trouble, and really it’s just a testament to everybody at the shop and our whole team. Really awesome to have a win so now we can really have some fun and focus on this championship.”

If Edwards’ race was problem-free, hardly anything else was ordinary. Even Earnhardt’s second-place finish was an anomaly.

The driver of the No. 88 Chevrolet, Dale Earnhardt, Jr., inadvertently activated the “kill” switch on his car at the start of the race by applying too much brake pressure. Earnhardt rolled onto pit road and lost two laps while his team rebooted the electronic control unit (ECU) that governs the electronic fuel injection.

Two wave-arounds under caution in the first half of the race put the 88 back on the lead lap, and Earnhardt parlayed his good fortune into a better-than-expected run. Unlike Harvick, Earnhardt benefited from restarts in the outside lane, and on the final restart with five laps left, he rocketed from fourth to second and held off third-place finisher Kurt Busch.

“We’ll work on that and maybe raise that threshold a little bit, because I wasn’t really using the brake that much.”

Earnhardt acknowledged he stole a runner-up finish with a car that wasn’t that good.

“We had about a 10th-place car,” Earnhardt said. “We weren’t really that good all day. We tried a setup that we’ve never really ran here before, just trying to learn a little something going forward, and we’ll go home and science it out a little bit.

“We got real lucky the last three restarts to be on the outside line. We restarted 10th, sixth and fourth, and when you restart fourth, you’re typically going to come out in second place after that. I was hoping we didn’t have any more cautions after that. So it was good. We’ll take it.”

Next week the traveling NASCAR circus head north On I-95 to the Henrico County Fairgrounds, aka Richmond International Raceway!