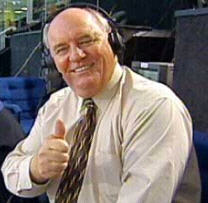 In 1979 Parsons paired with CBS and lead announcer Ken Squier for the first live flag-to-flag Daytona 500 to become the first driver with an in-car camera to follow them during a race.
While still racing part-time in the 80’s Parsons began a transition to a broadcast career first working as a pit reporter for ABC/ESPN and TBS/TNT.
In 1988 after retiring from full-time racing Parsons would go to work as an on-air broadcaster for ABC/ESPN until 2001 before moving to NBC/TNT where he would work until his death in 2007 with personalities such as Ned Jarrett, Allen Bestwick, and more.
Adding to Parsons broadcast TV career starting in the early 90s on WFMX radio covering Sprint Cup Series qualifying with Mark Garrow before moving over to PRN to co-host Fast Talk.

Misc Stats and Notes of Interest: