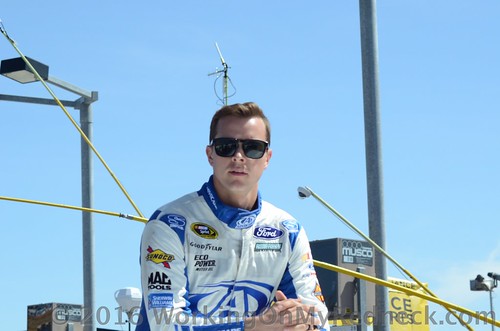 In three previous starts at the .533-mile oval, Bayne has recorded a best finish of 15th in the 2015 running of the Night Race at Bristol.

In 12 starts in the NASCAR XFINITY Series at the famed short track, Bayne has recorded four top-10 finishes, with a best finish of sixth coming in Aug. 2010 and Aug. 2013.

Bayne ran inside the top 10 for much of the 334-Lap event at Texas Motor Speedway and led for 12 laps before ultimately settling for a 15th-place finish after being involved in a multi-car incident on the backstretch on Lap 294.

Bayne currently trails the 16th and final cutoff for the Chase for the NASCAR Sprint Cup by just 25 points after the first seven races of the 2016 season.

Bayne on racing at Bristol:

“I love Bristol. Bristol is home. I grew up coming here and every time I get to race here is special. We’ve got a lot of good things going on right now with this AdvoCare Ford and I’m really excited to see where it goes. Hopefully we will continue to build this weekend and have another really strong run.”(RFR PR)

If RFR and Trevor Bayne is going to make a run at The Chase they both need to follow the temperatures!  That is now that it is mid April the temperature is starting to heat up, the No.6 AdvoCare Ford must do the same thing–get hot and pull off some great finishes!