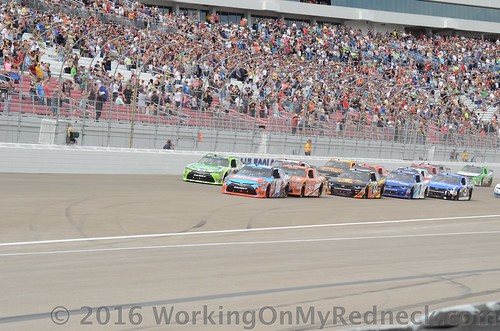 The NASCAR XFINITY Series will take racing back to its roots with Heat races, beginning with the first of four Dash 4 Cash events Saturday, April 16, at Bristol Motor Speedway.

NASCAR XFINITY Series drivers will each compete in one of two 50-lap Heat races for the chance to be eligible to win $100,000 in the 200-lap Main event. As in years past, the potential for a $1,000,000 total payout stands. New for this year, a driver who wins multiple Dash 4 Cash bonuses will earn a spot in the 2016 NASCAR XFINITY Series Chase, provided he/she remains eligible per the NASCAR rule book.

“Excitement for the NASCAR XFINITY Series Dash 4 Cash has reached a new level since the format change was announced in January,” said Steve O’Donnell, NASCAR executive vice president and chief racing development officer. “With potential NASCAR XFINITY Series Chase implications involved, we will see the intensity around these events ratcheted up.”

The two Heats will set the starting positions for the Main, with the top two NASCAR XFINITY Series championship points-earning drivers in each Heat becoming eligible for the Dash 4 Cash bonus. Of the four eligible Dash 4 Cash drivers, the highest-finishing driver in the Main will be awarded a $100,000 bonus.

“The new Dash 4 Cash format changes well-represent XFINITY’s goal to bring the best in entertainment to NASCAR fans by heightening the competition,” said Matt Lederer, executive director of sports marketing at Comcast. “Names are Made Here in the NASCAR XFINITY Series, and the Dash 4 Cash program provides an opportunity for these drivers to prove themselves on a national stage. XFINITY is changing the way fans experience NASCAR, and the shakeup in the competition for these races will create plenty of drama for them to see.”

In order to be eligible for the Dash 4 Cash bonus, drivers must have declared to earn NASCAR XFINITY Series points.

The Bucked Up 200 Preview

The Trucks Unload At Vegas

Another First Time Winner At Vegas?