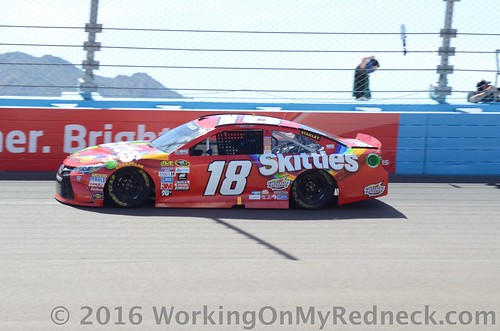 Four races in NASCAR’s top three series over eight days — and Kyle Busch won them all.

From Martinsville to Texas, Busch had consecutive weekend sweeps, something last done in NASCAR 25 years ago.

“I think the magic is Kyle Busch, but that’s just me,” Busch said with a smile before looking to car owner, Joe Gibbs, who started laughing and told the Joe Gibbs Racing No. 18 Toyota driver to not freak out on him.

“I’d admit I think it’s everything,” Busch then said. “You’ve got to have all the pieces of the puzzle put together, but I think more importantly we’ve got good cars, but the crew chiefs are just doing a really good job right now.”

Plus, the defending Sprint Cup champion can win races in whatever he drives. The 30-year-old Busch has already won 36 Sprint Cup races, with 80 Xfinity Series wins and 45 more in the Camping World Truck Series.

Along with his second consecutive Cup victory, taking the checkered flag just after midnight into Sunday morning, his Texas two-step included winning for the fourth time in his five Xfinity starts of 2016. His sweep at Martinsville was a truck victory and the Cup race.

“The guy is good. He’s got a great team behind him, and they put themselves in position at the end,” said, the runner-up in the first Cup night race this season. “I ain’t surprised by any means.”

The next Sprint Cup and Xfinity races are at Bristol, where Busch swept all three national series races in the same weekend in August 2010, however, trucks don’t race again until May 6.

“Ol Handsome” Harry Gant had consecutive weekend sweeps at Richmond and Dover in 1991, during a stretch when he won four Cup races in a row at age 51. It was Busch’s second weekend sweep at Texas, after doing it in the spring of 2013.

Busch, now the cup Series points leader, led only 34 of 334 laps in the rain-delayed Duck Commander 500 on Saturday night — one lap in the middle of the race and the last 33 following a 13-car incident for the final caution.

On Lap 302, the first after the final restart, Busch went high through Turn 4 to pass Martin Truex, Jr., who led six times for 141 laps before finishing sixth at the high-banked, 1 1/2-mile Texas track. Busch stayed ahead and went on to beat Earnhardt by nearly 4 seconds.

Truex and Austin Dillon, whose spin triggered the backstretch melee, had stayed out during a caution only a few laps before that when everyone else went to pit road to get fresh tires.

“When the race restarted for the final time we just didn’t have the grip everybody else had,” Truex said. “We were just sliding around.”

Busch won his seventh Cup race in 32 starts since returning last year from a compound fracture of his lower right leg and a broken left foot sustained in a crash in the 2015 season-opening Xfinity race at Daytona.

“I think that it’s just a part of everyone coming together. It’s a part of the whole team,” he said. “It’s not just me. It’s not just (wife) Samantha, but it’s (crew chief) Adam Stevens, it’s coach Gibbs, it’s the organization and everyone rallying around us. It’s my medical team, everyone that helped me.

“I think too, things are clicking. It’s been exciting to have the success that we’ve had as of late, and let’s just keep it going.”

It has been a very impressive over these last 32 races since KyBu returned to racing after his leg and foot injuries!  But the biggest question is how long can this team keep the fire burning?

Some pundits would think that this streak will come to an end soon.  However, are their memories so short as to forget a six year run from one Jimmie Johnson?  Could this be a new dynasty that has formed at Joe Gibbs Racing?

These questions and many more may be answered over the next thirty weeks of the 2016 race season!