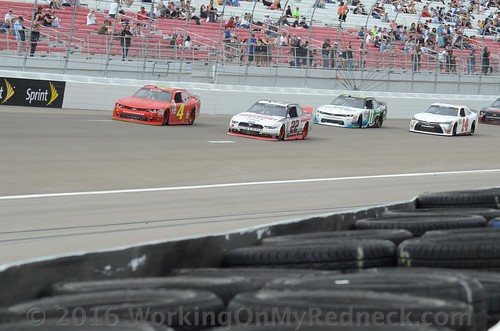 Here is a press release from the No. 4 Chevy Camaro JD Motorsports with Gary Keller race team regarding their Texas XFINITY  race Saturday night:

Chastain produced a solid finish despite being involved in a late-race accident.  That accident was caused when Jeb Burton’s car blew a tire and hit the second-turn wall on lap 144, collecting Blake Koch and Chastain in the aftermath. That accident produced the final caution of the race.

“We were shooting for a better finish, but, all in all, a pretty good night for the Flex Seal Chevy,” Chastain said. “We dropped back early in the race but came on strong late.”

The series moves on to Bristol, Tenn. April 16 for the first short-track race of the year.