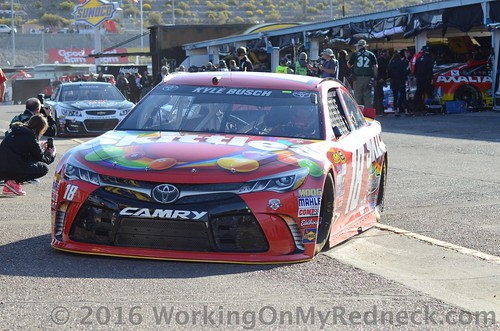 Opportunistic Kyle Busch sped away from the rest of the field after a restart with 33 laps left in Saturday night’s Duck Commander 500 at Texas Motor Speedway and collected his second straight NASCAR Sprint Cup Series victory.

Quite simply, the prodigious numbers continue to pile up for the driver of the No. 18 Joe Gibbs Racing Toyota. Busch posted the 36th victory of his Sprint Cup career and his second at Texas, having also swept the spring weekend at the 1.5-mile speedway in 2013.

Busch is the second driver to sweep consecutive NASCAR weekends. Harry Gant accomplished the feat in 1991, winning both the NASCAR XFINITY Series and NASCAR Sprint Cup races on consecutive weekends at Richmond and Dover.

With the victory, Busch also secured a spot in the Chase for the NASCAR Sprint Cup, ensuring he will defend the title he won last year.

“Our car was really, really fast, especially entry and center of the corner, and as the night progressed, I think the track actually came to us a little bit,” said Busch, who took over the series lead by six points over fourth-place finisher Jimmie Johnson. “Our car got a lot better, and (crew chief) Adam (Stevens) made some great adjustments all night long.

“We fought it in the beginning. We weren’t very good…”

Just good enough to win at the end.

Dale Earnhardt Jr. came home second after passing eventual third-place finisher Joey Logano for the runner-up spot with eight laps left. Johnson ran fourth, despite a succession of pit road issues, the first of which involved contact with Busch’s Toyota during the first pit stops of the race on Lap 30.

Sunoco Rookie of the Year candidate Chase Elliott scored a career-best fifth-place finish, one spot ahead of Martin Truex Jr., who led a race-high 141 laps but lost ground on old tires during the final 33-lap green-flag run.

“It hurts a little bit, but we’ll just take the positives and move on,” said Truex, who was the clear class of the field until divergent pit strategies proved his undoing.

Truex and Austin Dillon stayed out on old tires under caution on Lap 290 while all other lead-lap cars came to pit road for fresh tires. Though Truex maintained his lead, the move was disastrous for Dillon, who dropped back rapidly after the restart on Lap 293 and washed up the track racing off Turn 2 in close quarters with Denny Hamlin.

Dillon’s Chevrolet slid up into the path of Jimmie Johnson, who was unable to avoid contact. Dillon was turned sharply into the outside wall and bounced across the track into oncoming traffic. The resulting 13-car accident damaged all three Richard Childress Racing cars and scrambled the field for the decisive restart on Lap 302.

Busch rocketed to the outside at the drop of the green flag, and cleared Logano through Turns 3 and 4 as Truex faded on old rubber.

“The restart was going to be key,” Busch said. “If I could just get out in front of him, I knew I could protect the rest of the race. They had a good restart, but we got a better one, and I just had to get up on his door. He chose the inside and the inside has been winning the race all night long, but this time, on the last restart, (the outside) finally prevailed for us.”

Polesitter Carl Edwards led 124 laps but returned to pit road with a loose wheel after a restart on Lap 222 and spent nearly 70 circuits one lap down before working his way back to seventh at the finish. Kasey Kahne, Kurt Busch and Kevin Harvick completed the top 10.

Check out the unofficial results of the Duck Commander 500 at Texas Motor Speedway.