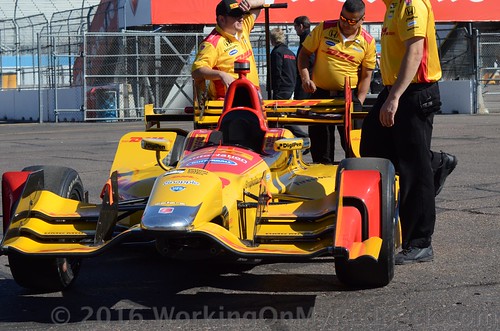 IndyCar’s private Manufacturers’ test on Tuesday at the Indianapolis Motor Speedway could provide the series with the first feedback from Chevrolet drivers on its dome skid safety device.

Honda, which first tested dome skids at the Fontana superspeedway with drivers Ryan Hunter-Reay and James Hinchcliffe, has Andretti Autosport’s Marco Andretti ready to go on Tuesday, and he’ll be joined by four Chevy drivers, with one each from the Bowtie’s four full-time teams.

Cool or inclement weather around Indianapolis could delay Tuesday’s MFG test and Wednesday’s wide-scale aero kit safety test where most Indy 500 teams will be represented. Back-up dates of April 7-8 and 28-29 are in place if delays prohibit on-track activities.

The dome-shaped pieces of titanium, which are fitted to the bottom of an Indy car chassis, increase the distance between the bottom of the car and the track surface by approximately 11 millimeters (almost a half-inch), and in a state of yaw (when the car is rotating sideways) dome skids are said to reduce aerodynamic lift. In concert with rear beam wing flaps, the two safety systems should greatly reduce the chance of flights during the 100th running of the Indy 500.

The return of dome skids to IndyCar’s rule book comes as a reaction to the three flights that took place during practice for the 2015 Indy 500 when aerodynamic forces sent Chevy-powered cars skyward after their drivers spun and flew, or spun, hit the wall while facing backwards, climbed the wall, then flew.

The units have been used on superspeedways by IndyCar in the past with its previous chassis, the Dallara IR07, and dome skids were also required by the ACO in 2009 with its LMP1 cars after flights or blow-overs occurred. They have never been used in competition on the current Dallara DW12 Indy car.

“At anything more than approximately 25 degrees of yaw [in a spin], those late 2000s P1 cars would defeat its complete downforce package and create lift to cause blow-overs,” said one P1 engineer. “The dome skids don’t have a lot of practical science behind them, but I do know there are studies that suggest they reduce lift. The ‘pop’ that happens when a ‘downforce’ car spins and loses all downforce – when the downforces comes off and the chassis pops up – is what they’re trying to stop.”

IndyCar teams are particularly interested to hear what the Chevy drivers have to say about dome skids after Honda drivers had overwhelmingly negative feedback to share at Fontana.

“Hinch and I drove on them at the same time, our feedback was collected independently, and what we had to say was identical down to the point of noting the inconsistencies in the cars’ handling, how it unsettled the cars over the bumps,” Hunter-Reay toldRACER. “Our feedback was the exact same.”

Asked if having a full day or more to work with the dome skids to find better chassis setups would improve his opinion, RHR was unsure it would overcome the erratic handling he encountered at speeds above 200mph.

It was suggested by more than a few members of the IndyCar paddock that if the dome skid test at IMS delivers more negative feedback – this time from Chevy drivers, the series could remove the units as mandatory items for the Indy, Texas, and Pocono superspeedways. IndyCar competition president Jay Frye says those suggestions are unfounded.

Due to the increased ride height to accommodate dome skids, additional downforce will be taken away from the DW12’s underwing and, as part of the IMS testing, it’s believed teams will be asked to run with strakes in the diffuser and diffuser sidewalls installed to regain some of the lost downforce.

It is great to see IndyCar continually looking at ways to keep those 1575 lbs. rocket ships from getting airborne and becoming completely unguided projectiles!