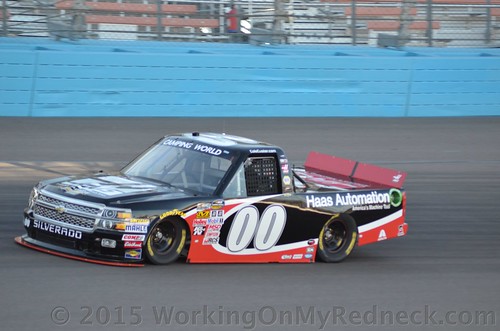 Now that the Camping World Trucks have gotten back onto the race track after, what seemed like an eternity, about six weeks to be exact, it is time for some beating and banging from these teams at Martinsville!

Yesterday’s final practice proved to be quite interesting and when it was all said and done the 18 year old JR Motorsports driver, Cole Custer was sitting on top of the speed charts with a lap time of 19.788 and a speed of 95.694 mph.  Closely following Custer on the speed charts was another 18 year old kid, John Hunter Nemechek, with a time of 19.826 and a speed of 95.511!  These two young guns were just .036 seconds apart! Third on the speed chart is an older and more seasoned race car driver, a 19 year old by the name of Ben Rhodes!  (Read tongue in cheek!)

When the green flag flies this afternoon at the 18th Annual Alpha Energy Solutions 250 there will be great anxiety and excitement.  The anxiety will be on the part of the CWTS drivers because they have not been behind the wheel of their race truck in more than six weeks.  Meanwhile the excitement will be generate by those same drivers in the hearts and minds of the race fans watching this fast paced short track race!

Could this be the race that one of this young guns hoist the trophy up for all the fans to witness?

All I can say is that you should grab your favorite comfy chair, strap in, and hold on tight!