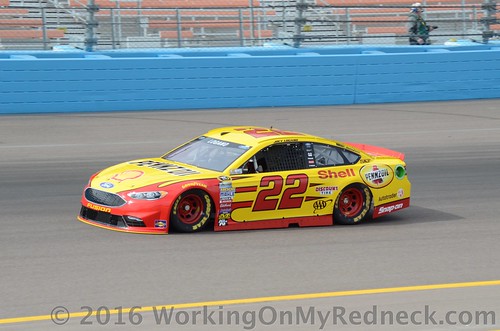 They say that the third time is a charm.  It most definitely was for Joey Logano!  But then again, so were the first and second.

The driver of the No. 22 Team Penske Ford dominated qualifying for Sunday’s STP 500, topping the speed chart in all three sessions of Friday’s knockout qualifying at Martinsville Speedway.

The Coors Light Pole Award was the third straight for Logano at the .526-mile paperclip-shaped short track, marking the first time a driver has won three consecutive poles at Martinsville since Jeff Gordon accomplished the feat in 2003-2004.

Navigating the speedway in 19.513 seconds that equates to 97.043 mph, Logano claimed the top starting in a NASCAR Sprint Cup Series race for the 15th time in his career.

Logano, who was taken out of last year’s Chase race when Matt Kenseth drove him into the Turn 1 wall, also is the third driver to sweep all three rounds in time trials since the group qualifying format was instituted at the start of the 2014 season.

“I couldn’t be more proud of these guys,” Logano said of his team. “I say all the time that Martinsville is the most important track to start up front, and that’s when you’ve got to come here and really show what you’ve got.

“This is a nice little fire for us to get going. We’ve had a good season so far, but you want to break through and get some wins, and this pole is definitely going to help with some momentum.”

Logano edged outside front-row starter Kasey Kahne (97.033 mph) by .002 seconds. The driver of the No. 5 Hendrick Motorsports Chevrolet hadn’t enjoyed a top-five position on the grid since last October’s Chase race at Talladega.

“It feels good,” Kahne said. “The car was really fast, this Great Clips Chevrolet. The guys did a nice job in practice and in qualifying. I just kept getting better with my laps. We didn’t make any adjustments. The car is fine. Just let me get my laps a little better. So we did that, and it was close.

“Joey just barely got us. But it is definitely a good starting spot. That was one of my goals today was to help out on pit road (by earning second pit selection). Pit road is huge here. We have the best pit crew for stops, than anyone, in my opinion. And if I can help them on pit road, myself, and get a better spot, I think all that will be beneficial on Sunday.”

Vickers was the only Stewart-Haas Racing driver to advance past the first round. Kevin Harvick and Kurt Busch, both former winners at the track, will start 19th and 23rd, respectively.

Denny Hamlin — reigning race winner and one of the pre-race favorites — earned the eighth starting spot, but eight-time Martinsville winner Jimmie Johnson wasn’t as fortunate. The six-time Sprint Cup champion squeaked into the second round by .007 seconds over Carl Edwards but couldn’t improve beyond the 24th-place starting position.

The two leading drivers in the Sunoco Rookie of the Year battle, however, both made the top 12. Chase Elliott will take the green flag from in 10th, with Ryan Blaney right behind him in 12th, as the Wood Brothers Racing team returns to Martinsville for the first time since 2011.

Check out the full starting lineup!