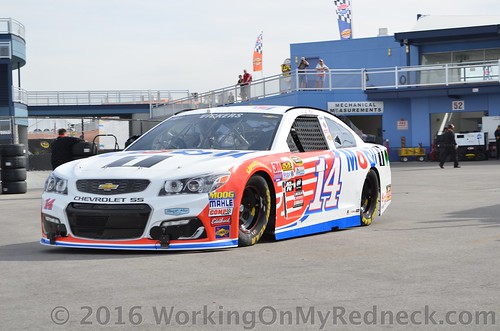 Brian Vickers drove to the top the speed charts in Friday’s opening NASCAR Sprint Cup Series practice at the Martinsville Speedway motoring his #14 Stewart Haas Racing Chevrolet to a lap time of 19.485 seconds and a speed of 97.182 mph. Vickers is one of two temporarily drivers filling in for the injured Tony Stewart in 2016.

Following Vickers in the leaderboard in first practice was Denny Hamlin with a time of 19.500 seconds and a speed of 97.108 mph while Joey Logano logged at time of 19.504.  Rounding out the remaining top ten are Ryan Newman,  Kyle Larson, Kasey Kahne, Ryan Blaney, Matt Kenseth,  Paul Menard, and Jaime McMurray.

Series points leader Kevin Harvick was 17th quickest with a speed of 96.381 mph in the No. 4 Stewart Haas Racing Chevrolet.

Trevor Bayne spun and smacked the wall with less than a minute remaining in the this practice session, significantly damaging to his #6 Roush Fenway Racing Ford, obviously he will be going to his backup car.

“In qualifying trim I thought our car drove good, it handled good, but I was really lagging in the braking zones,” Bayne said. “We were giving up two to three-tenths into both corners and I tried to just push the braking zone a little bit more and it started wheel-hopping really bad.  There was nothing I could do about it.  Once it started bouncing I tried to save it and once it got backwards stood in the gas and it just backed in.

“The back-up car will be good.  I hate that we worked on that one in race trim and I tore it up, but I just feel really bad about it.  I think this might be the first one I’ve got to for a back-up in practice, but they’ll get it ready for qualifying.”