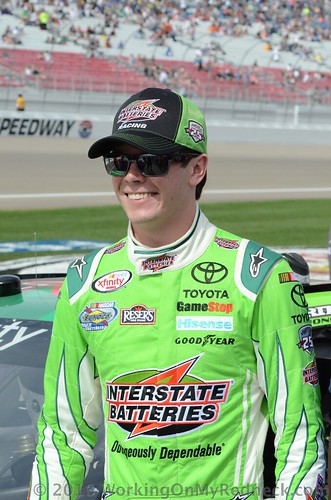 Rookie Xfinity Series driver Erik Jones said Joe Gibbs Racing knows what it plans to do with him in 2017.

Jones didn’t give specifics on the team’s plan. The 20-year old driver is five races into the Xfinity season with the No. 20 team for JGR after winning last year’s Camping World Truck Series title for Kyle Busch Motorsports.

Jones, who won twice in the Xfinity Series in 2015 in a part-time capacity, is seventh in the points after five races this season.  The Michigan native has three top-five finishes and won the pole at Phoenix.

“I’m pretty focused this year on hopefully getting this Xfinity championship, that would be pretty great momentum for me,” Jones said. “Just excited to see what the next few years are going to bring.”

Knowing where he’ll be a year from now has eased a week-to-week burden that had been on Jones his entire career.

“It’s the first time in my career where I’ve been in a position like this, where I am set in my future at this point at least, and that’s a great feeling as a young driver, not to really have to really fight every week,” Jones said. “I still fight every week, like I have always, but it’s nice not to have that added pressure of not knowing what the future holds or what’s going to happen. It’s definitely a little bit more relaxed knowing that I can just go out and do my best and hey, if it doesn’t work out, it doesn’t work out.”

From as early as the beginning of last season when Jones was filling in for Kyle Busch in the XFINITY ride, and especially when Erik filled in for Denny Hamlin in the Cup ride, I have expressed the thought that Joe Gibbs and Toyota would purchase a ride for Jones in the Cup Series in 2017.  When the announcement came that Furniture Row Racing was moving to Toyota and aligning themselves up JGR, coupled with the fact that Barney Visser wanted to expand to two race teams in 2017, knowing that the JGR stable has a “full house”, it was quite evident to this writer that Erik Jones was destined to be the driver of the second FRR Toyota in 2017!

Now with the above press release it really seems that is exactly where this young phenom will end up in 2017 with the help of FRR, JGR, and Toyota’s racing division TRD!  The only thing missing now is the formal announcement from Joe Gibbs and Barney Visser.