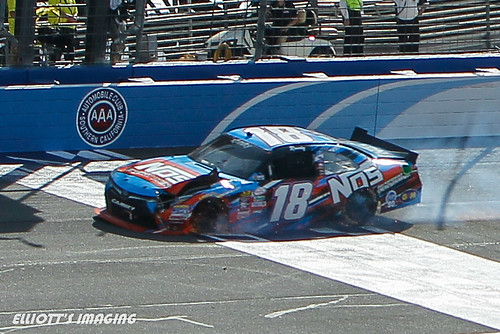 As the green flag dropped today in Fontana, CA, Kyle Busch was on course to etch his name along side Sam Ard as the only drivers to ever win four consecutive races in the XFINITY Series.

So far in 2016, ol Rowdy had won all three of the races that he had participated in, Atlanta, Las Vegas, and last week in Phoenix.  The race in Fontana, CA looked like just the icing on the cake, and the opportunity for Rowdy to ink his name in yet another part of the XFINITY record book.  After all, KyBu is the winningest driver to ever strap int0 an XFINITY race car with 79 victories.

It didn’t take long before Kyle found his way to the lead at the Auto Club Speedway.  As the race unfolded he was to lead 133 laps of the 150 scheduled race.  The day was turning into the fourth chapter of the book entitled the 2016 Kyle Busch Show. Busch’s ship had set sail and there did not appear that there was anyone that had anything for him!  This was setting up to be a glorious celebration for KyBu and it appeared that his name was going to etched into another part of the Busch/Nationwide/XFINITY record book.

As Busch came across the start/finish line to take the white flag and begin to celebrate an impending win, the unthinkable happened.  Busch’s left front tire exploded and took out part of the left front fender well.  With that tire failure in turn number one of the last lap the vision of winning four in a row seemed to vanish from the vision of Kyle Busch!

As Busch slowed down his teammate, Daniel Suarez, went by him to assume the lead of the race.  However, as Suarez exited turn number two, some 300 yards after assuming the lead he ran out of gas.  With Busch a few car lengths behind him there was a rejuvenation for Kyle’s chances to win.  When Rowdy noticed that Suarez was out of gas, he tried to gas up his car as he was entering turn number 3 hoping to make it to the checkered flag for the win.

Enter Austin Dillon into the race picture!  (Where did he come from?)

Even though Rowdy only had three wheels turning and burning, it looked like he could possibly have just enough energy to hobble his car to the finish line for a win.  But wait!  Austin Dillon emerged from turn three with a full head of steam and is closing on Kyle Busch like he was shot out of a cannon.

As Dillon approaches Rowdy’s car, high wide and handsome, Busch appears to try to close the outside door and squeezes Dillon up into the fence.  Notwithstanding the squeeze play by Rowdy, Dillon was able to get by with minimal damage to his car and snatch the victory from the grasp of Kyle Busch, and thereby preventing Rowdy from putting his name into the XFINITY Series record books today.

It looks like the domination of Kyle Busch over the rest of the XFINITY drivers ended today, temporarily anyway!

Check out the unofficial results of the TreatMyClot,com 300. 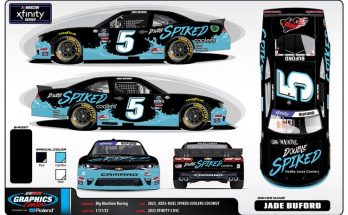 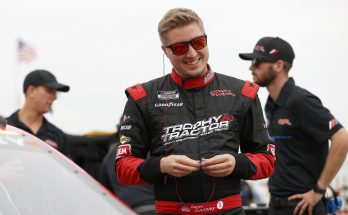 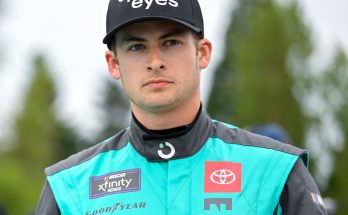