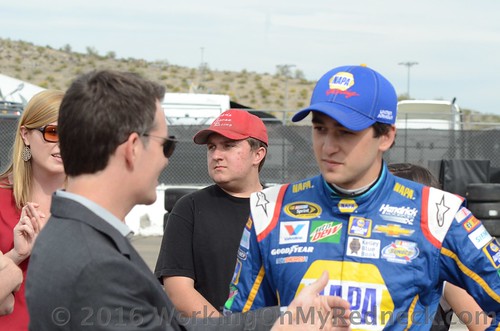 Four months removed from the driver’s seat, Jeff Gordon remains a fixture at the racetrack.

Ditto Darrell Waltrip and Larry McReynolds, just three of the many former drivers and a crew chiefs now applying their talents in front of the television camera instead of behind it, undoubtedly hired in part for their ability to offer insights gained from numerous years of experiencing on the racetrack and pit road.

Waltrip already has learned what Gordon may one day learn, which is driving bumper-to-bumper at breakneck speeds is not nearly as uneasy as sometimes having to speak harshly of former peers for questionable moves or strategy on the racetrack.

For instance, when Matt Kenseth purposely wrecked Joey Logano in a crucial NASCAR Chase for the Sprint Cup Championship race last November at Martinsville, Va., Waltrip, a Fox Sports analyst since 2001, likely cringed knowing he eventually would be asked to share his opinion of the blatant maneuver.

“The toughest thing we have to do is try to maintain a good relationship with all the drivers, but call them out when necessary,” said Waltrip, who along with Gordon will be in the Fox broadcast booth Sunday for the Good Sam 500 at Phoenix International Raceway. “A good example of that was Matt and what happened at Martinsville. He’s one of the most respected drivers in the garage and has a lot of friends. But I felt like he stepped over the line. He did something I couldn’t condone.

“I’m paid to tell people what I think.  You can’t have the respect of viewers and not be honest. You don’t want to be overly critical, but you can’t sugar coat it, either.

“I’ve had drivers knock on my coach or send me a text many times saying that they didn’t appreciate what I said. It’s a fine line you have to walk. You don’t want to be critical when it’s not necessary and you don’t want to show favoritism. You have to call it like you see it.”

Kyle Petty, an NBC Sports analyst along with Jeff Burton and former crew chief Steve Letarte, said the key is “just being honest.”appreciate what I said. It’s a fine line you have to walk. You don’t want to be critical when it’s not necessary and you don’t want to show favoritism. You have to call it like you see it.”

“I wouldn’t say I’ve had friendships become strained from something I may have said, but there’s been times some acquaintances have been strained,” Petty said. “The thing is we have incredibly intelligent fans in this sport and you can’t BS them. When you try to do that, you lose your credibility.

“I’ve always spoken my mind. I’ve said some things about Danica (Patrick) and I may not have said it the right way. But what I’m basically saying is I’d just like to see her race more. Dig a little harder. She can go fast and she has talent. But once you get in the game, you have to do something.

“There were even a couple of times last year I had to criticize (Kenseth) and I love the guy. He’s a great friend. But I didn’t like what I was seeing on the racetrack.”

So Petty said so.

In the end, Waltrip said it’s all about trust.

“Drivers have to trust you,” Waltrip said. “They’ve got to know you’re not against them. Hopefully, they respect you for what you do. And respect begets respect.”