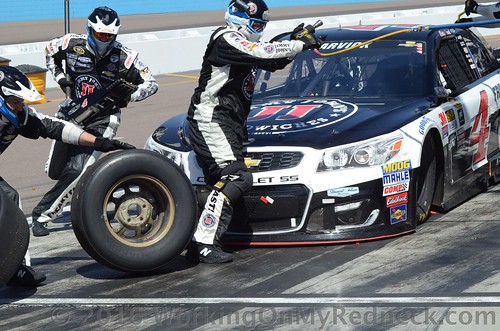 In a stunning move severing its long ties to General Motors, Stewart-Haas Racing will become a Ford-backed team beginning in 2017, the team and manufacturer announced on Wednesday.

The elite NASCAR organization fields a star-studded lineup consisting of Kevin Harvick, Kurt Busch, Danica Patrick and Tony Stewart — who is retiring at the end of the year and will be replaced by Clint Bowyer. SHR has been one of Chevrolet’s marquee teams, winning two championships within the past five years.

Since its 2003 inception as Haas CNC Racing, the team has campaigned General Motors cars every season. For the past six years they have had a strong relationship with Hendrick Motorsports, which has supplied SHR with engines, chassis and technical data. The organization changed its name when Stewart joined the team as co-owner/driver in 2009.

But in 2017, SHR will begin building its own cars in-house, with Ford supplying the engines. The two parties began talking six months ago, with Stewart describing the conversations as “casual” initially before becoming more serious. The idea of being independent and not reliant on another organization was the impetus for SHR making the switch.

With Team Penske already under its umbrella, SHR gives Ford two championship-caliber teams and a roster capable of snapping Chevrolet’s streak of having won every manufacturers championship since 2003. A Ford driver has not captured a premier division title since 2004.

The once tight alliance between Stewart-Haas Racing and Hendrick Motorsports is splintering with the news SHR is changing manufacturers from Chevrolet to Ford for the 2017 season.

SHR’s decision to defect has created an awkward scenario where the four-car team remains aligned with Hendrick, which supplies SHR with engines, cars and technical support, for the current season yet preparations will soon begin in earnest for its conversion to Ford.

During the introductory press conference recently, Tony Stewart, SHR co-owner, said Rick Hendrick was informed last month that SHR was likely to leave Chevrolet and join the Ford camp. Ever since, discussions between SHR vice president of competition Greg Zipadelli and Hendrick general manager Doug Duchardt have been ongoing on how the two organizations would approach the 2016 season.

“Obviously, the relationship has changed,” Duchardt told SiriusXM Radio. “It’s not business as usual. For sure, I feel like that Greg and I are on the same page on how we are going to work together this year and move forward. We’re going to work as professionally as we can to get through 2016. We both have the same goals and that’s win races and championships and this year is going to be for Chevrolet.”

Stewart acknowledged the changing dynamic, with Hendrick still obligated to provide equipment and share information with a team that is going to a rival manufacturer at the end of the season.

“Obviously, it will change in some respects for 2016 with this news,” Stewart said. “But we believe we’ll still have a really good working relationship for another year this year.”

Hendrick never felt a sense of resentment and a high level of respect still exists between the two teams, Duchardt told SiriusXM Radio. He was informed by SHR executives their decision had nothing to do with performance or lack thereof, only what made the most business sense.

Duchardt pledged that SHR will still receive the same caliber of equipment it has previously, engines and chassis good enough to propel SHR to championships in 2011 with Stewart and 2014 with Kevin Harvick. SHR also fields cars for Kurt Busch and Danica Patrick, with Clint Bowyer set to replace the retiring Stewart next season.

“I don’t want any of the Stewart-Haas fans to think that we’re not going to do what we can to have successful and competitive engines and chassis for those teams,” Duchardt said. “We’re going to absolutely make sure that is the case.”

In announcing the move, Stewart-Haas Racing co-owner Tony Stewart alluded to the team’s relationship with Hendrick changing in its final season.

Hendrick said it would be a natural byproduct of SHR building its own chassis starting next season.

“I think they’ll be working on stuff they don’t want us to see because they’ll have to start their own chassis shop,” Hendrick said. “We’ve been gentlemen about it, we’re all friends, we all understand the dynamics of what’s going on. And so we’ll do the chassis as much as they want, but at some point, they’ll be doing their own stuff.

“I think as we have worked in the past, knowing what was going on down the road, we shared more. I still think we’ll work together but not at the same capacity that we have been and with as much stuff as we’ve been sharing because when they unplug from us, they’ve got to start getting their stuff ready, too.”

Even though the powers that be within the Hendrick Motorsports organization and those powers to be inside Stewart Haas Racing have pledged that there will be no degradation of equipment for SHR during the 2016 race season, it stands to reason that there will be a “cutoff date” whereby SHR will no longer be privy to, or be a part of the inner workings of, the Chevy technology and the sharing of information from HMS.  When that time comes it also stands to reason that there will be a degradation in the performance of all four of the Stewart Haas Racing teams.

In light of the present performance of SHR there are really only two teams, Kevin Harvick’s No. 4 team and Kurt Busch’s No. 41 team, that are really of any concern to The Chase at the end of this season.   Danica Patrick’s team and and Tony Stewart’s team are also rans and are non competitive over the last two years.

Therefore, it is normal to be concerned and to wonder how long that the two SHR teams, Harvick and KuBu, will be competing a the very high level that those teams have been for the last two years.  It is normal to think that whenever Chevy and Hendrick Motorsports decides to cutoff SHR from all the support that this team has had the luxury of being privy to that at that point there will be a downward vector in their performance!

But at what point will that event happen?  How will it affect SHR and their hopes of another championship? Can SHR overcome the inevitable of losing the tech info from Hendrick?

All these questions and a whole lot more will be answered in the coming months!

One Comment on “What Are The Ramifications Of The Impending SHR-Ford Relationship?”