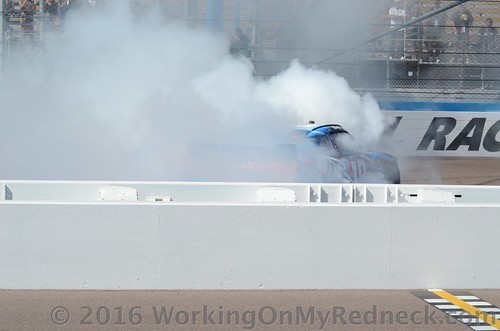 Busch dominated another race on Saturday by leading 185 of the 200 laps to score his third victory in a row. He has now led 493 of the last 563 laps he has run in this series.  Can we say domination?

He now has been to Gatorade Victory Lane in nine of the last 17 series races he has entered and has 79 career NXS victories.

On Saturday he led another 1-2-3 finish for Joe Gibbs Racing, Erik Jones was second and Daniel Suarez slotted in third.

“I guess we just have a knack for this place,” Busch said. “We didn’t sit on the pole, but our teammates did and were obviously very fast. They made me run hard all day long.

“The Xfinity Series, its fun to come here and participate. I learn a lot and do that for a reason: to try and make myself better on Sundays and hopefully it helps.”

Busch believes he learned a great deal Saturday that will help him get the win in Sunday’s Good Sam 500 NASCAR Sprint Cup Series race.

Today set a NASCAR record third straight sweep of the top three spots for JGR with Jones and Suarez second and third behind Busch.

“We had a good car but just not good enough to get around Kyle,” Jones said. “Restarts were our best shot but once he got ahead there really wasn’t much we could do. Still proud of this team and JGR for another strong day.”