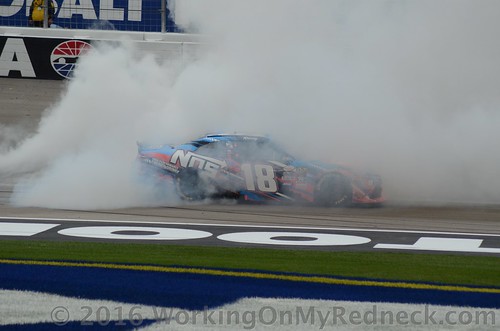 The weekend started out with warm weather, lots of sunshine, fast speeds, and great expectations by many of the the Xfinity drivers as the unloaded their races cars at Las Vegas Motor Speedway Friday.  When the checkered flag flew there was no doubt that it was the Kyle Busch Show that everyone was watching.  Busch put on an extremely dominating driving clinic for all to witness, leading 199 of the 200 laps of the Boyd’s Gaming 300!

This was his very first win at the Las Vegas Motor Speedway, believe it or not!

The race developed into somewhat of a fuel milage race this afternoon.  Busch pitted last just on the extreme outside of their fuel window.  Since Busch doesn’t compete for points in the NXS, his crew chief was betting the farm, and with the lead that Kyle had gathered, that his driver could manage to save just enough fuel to make it to the checkered flag and secure the win.

“We were worried about fuel, but more so we more so worried about (Daniel) Suarez,” Busch said. “He was on me there at the end, he was really, really fast. I can’t say enough about all these guys, everyone at Joe Gibbs Racing prepares some really fast Camrys and this NOS Energy Drink Camry was the best.

Eureka, there was enough fuel to make it the finish and one massive burnout celebration!

“It’s awesome that they have always supported racing out here in Vegas,” Busch said. “Fans have always supported the Bullring and then fans that always come out here to Las Vegas Motor Speedway. I love it and wouldn’t want to be doing anything else, so I’m glad they are out here supporting all of us, including myself and hopefully they’re buying some NOS here tonight.”

Not only was Busch dominating all afternoon, but his two Joe Gibbs Racing teammates had equally good afternoons finish second, Daniel Suarez, and third Erik Jones.

For Jones, rallying back to a third place finish was quite an accomplishment after a pit road penalty that ultimately put him two laps down.  With a “lucky dog” and later a wave around, Jones came charging through the field like a warm knife through butter!

Check out the unofficial results of the Boyd’s Gaming 300.