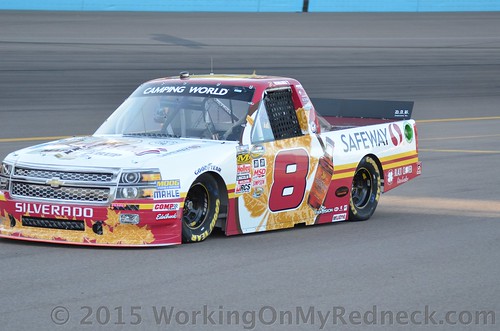 John Hunter Nemechek inherited the lead in the Great Clips 200 when Christopher Bell blew a right front tire, careening very hard into the retaining wall wrecking with eight laps to go.   During the restart JHN got the jump on the field on a restart with two laps to go and went on to win the NASCAR Camping World Truck Series race at Atlanta Motor Speedway on Saturday.

The victory was the second career win for the 19-year-old son of former Sprint Cup winner Front Row Joe Nemechek.

Matt Crafton appeared to have the dominate horse today as he led 76 of 130 laps. He was leading the race when misfortune struck in the form a a wreck caused by Bell.  Christopher Bell misjudged a move and clipped the right rear quarter panel of his teammate, Daniel Suarez.  Suarez was then turned left into Crafton, which stuck Crafton and Suarez very hard into the fence, destroying their race trucks.

On the final restart, Nemechek lined up on the inside and John Wes Townley took the high line in the first row. Townley spun his tires allowing Nemechek to get away clean!  That was all it took for John Hunter to jump out to the lead on his way to the victory.

Now the Camping World Truck Series has off for the next six weeks.  Their next race will occur on April 2nd at Martinsville.