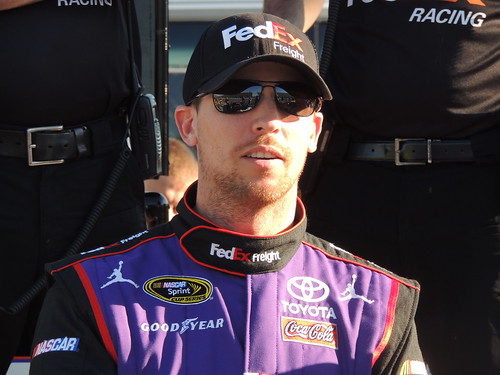 Joe Gibbs Racing driver #11 Denny Hamlin has won the 2016 Daytona 500 today by edging out Martin Truex Jr in a photo finish. This finish was the closest finish in Daytona history just 0.010 seconds separated the two cars.

This win is Hamlin’s first in 11 attempts in the Great American Race.

Matt Kenseth was leading in the final lap going into turn number three, but Hamlin made a terrific pass coming out of the final turn in a tightly packed field.

Kenseth, who was seeking his 3rd Daytona 500 victory, finished 14th after his car got loose as Hamlin got his run and split Truex and Kenseth on the final lap.

Hamlin was running 4th on the closing lap before making a very bold move to the outside, wedging his car between Kenseth and Truex, then motoring by Truex by inches at the finish line.

Denny has now become the first driver since Davey Allison, in 1992, to win the Daytona 500 after leading at the halfway point.

The Chesterfield, Va native came out of the 4th yellow of the day with two fresh tires and, the lead, with 77 laps to go.

Hamlin led the most laps of the race (95) and his Toyota Camry seemed flawless today.

Not always does the dominate race car win the Daytona 500, however, today that dominate horse was able to inch out the victory by the skin of his teeth.