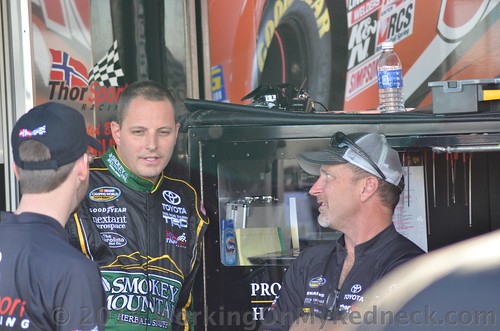 The field had taken the white flag lap when a multi-truck accident broke out just past the start/finish line. Among those collected was Bell, whose truck went nose first into the outside wall and then began flipping very violently.

Bell emerged from his truck under his own power from the demolished #4 Toyota and walked to an awaiting ambulance. He was taken to the infield care center before being transferred via ambulance to the Halifax Medical Center for further evaluation. After being examined by the awaiting hospital staff, he was released early Saturday morning, the team said in a press statement.

All other drivers involved in the accident were evaluated and released from the infield care center.

Johnny Sauter was leading when that caution flag flew, and because there were fewer than 2 laps remaining the NextEra Energy Resources 250 was considered an official race. Ryan Truex finished second, with Parker Kligerman third, Brandon Brown fourth and rounding out the top five is Travis Kvapil.

This win at Daytona was the 11th of Sauter’s CWTS career and this race was his first start with his new team GMS Racing. Sauter credited Bell with pushing him into the lead.  Additionally, Sauter was directly in front of Bell’s No. 4 Toyota Tundra when it broke loose and flipped violently.

“Got to thank him for pushing me first of all, and then I hope he’s okay,” Sauter said