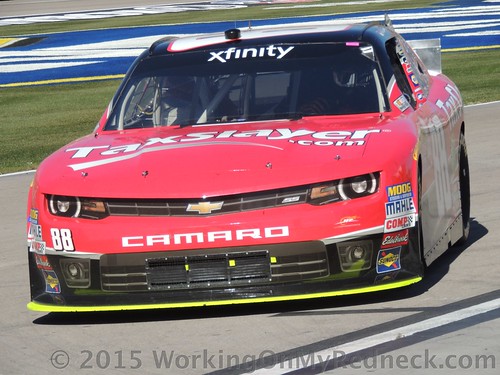 JR Motorsports (JRM) announced today that SunEnergy1, one of the world’s largest privately held solar energy companies, will partner with the team to sponsor the No. 88 Chevrolet Camaro in five NASCAR Xfinity Series (NXS) events this year.  Kenny Habul, SunEnergy1 founder and CEO and a veteran road racer, will race the No. 88 SunEnergy1 Chevrolet in three of the five races.  Late-model standout Josh Berry will drive in the remaining two events.

Habul will pilot the No. 88 SunEnergy1 Chevrolet at Watkins Glen International (Aug. 6), Mid-Ohio Sports Car Course (Aug. 13) and Road America (Aug. 27).  Berry will be featured in races at Iowa Speedway (July 30) and Kentucky Speedway (Sept. 24). In addition to its primary placement, SunEnergy1 will also receive associate branding on the No. 88 Chevrolet for the full season.

“We’re happy to welcome Kenny and SunEnergy1 to JR Motorsports,” said Kelley Earnhardt Miller, general manager of JRM.  “Kenny has a contagious passion for road racing.  I know he’ll be a great asset for the team during these events.  This is also another great opportunity for Josh.  I think everyone saw what he is capable of at Richmond last year.  These two races will help showcase his talents even further.”

This marks the fifth year Habul and SunEnergy1 have appeared in NXS competition.  A seasoned road- course veteran and Australian native, Habul holds 12 NXS starts. He began his career in the Australian Formula 3 ranks, and in 2005, made his stock car debut with the NASCAR Canadian Tire Series.

“I am very excited to be driving for a first-class operation like JR Motorsports,” Habul said.  “I have a love for the Xfinity road courses. I grew up in Australia with a huge love for Chevrolet products, and it’s a dream to be racing a Camaro.”

Coming off a late model year that included 10 wins, Berry is set to make his fourth series start at Iowa Speedway.  He put on an impressive performance in his only NXS start in 2015, qualifying the No. 88 Chevrolet fifth and racing his way to a seventh-place finish at Richmond International Raceway.

“When I first came to JR Motorsports, I never dreamed I’d get the chance to race in the Xfinity Series,” said Berry, who has earned two track championships in the JRM late model.  “It’s through a lot of hard work by numerous people that I have opportunities like this, especially Dale and Kelley.  I can’t wait to get on the track and see what we can do with the SunEnergy1 Chevrolet.”

The addition of Berry and Habul all but completes the driver roster of the JRM flagship No. 88 “All-Star” Chevy in 2016.  The pair join previously announced drivers Alex Bowman, Cole Custer, Dale Earnhardt Jr., Chase Elliott and Kevin Harvick.

It looks like once again that the JRM flagship #88 will host numerous drivers but will still be in the running for the owners championship for 2016.