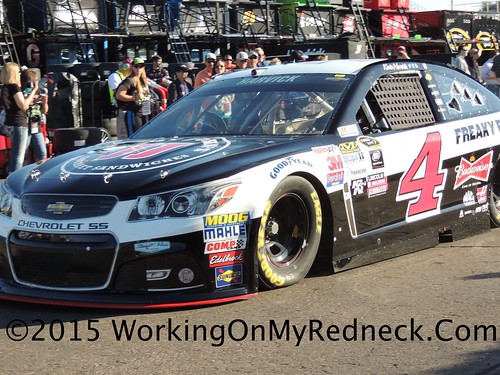 NASCAR made the announcement that they had found violations with three Sprint Cup Series teams prior to and after the completion of Sunday’s Daytona 500 qualifying.

NASCAR discovered that the track bars on the Stewart-Haas Racing cars of Brian Vickers and Kevin Harvick were out of compliance during their post-qualifying inspection. Both of their qualifying times were disallowed per NASCAR.

NASCAR also made the announcement that a roof flap on Martin Truex Jr.‘s car was not in compliance. The roof flap issue was found before he took to the track for qualifying. The #78 team was unable to fix the violation in the 5 minutes allowed and they had to forfeit their qualifying attempt. The car was then returned to the inspection area in the garage where NASCAR took some photos of roof flap. After the photos were taken the car was then released back to the team.

All three teams will be guaranteed a starting spot because they all have charters, but must start at the rear of their Can-Am Duel race on Thursday night at Daytona.

Each team could be subject to further penalties by NASCAR. If any other penalties are handed down NASCAR would most likely make an announcement later this week.