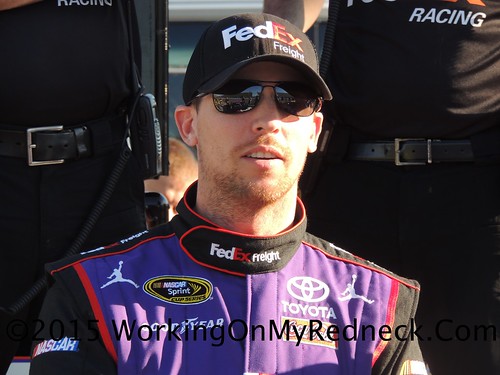 At the end of the 2015 Sprint Cup season, Denny Hamlin underwent a successful ACL surgery fro a torn anterior cruciate ligament in his right knee.  He reports that his right knee is finally showing some progress during his recovery.

Speaking from Los Angeles where Hamlin is appearing at NASCAR’s West Coast Media Day, he appeared to be in good spirits.

When questioned about the progress of his knee Hamlin answered more positively this week than last week in Charlotte.

“It is quite a bit better.  The biggest thing is the range of motion has not been as good, and it is kind of behind. But we’re catching up to being on schedule here, and just in the last seven days, I think it’s amazing how far we’ve gotten in rehab to getting this thing better.

I’m very confident that in two weeks it’s going to be a non-issue on track, and really for me it’s more like when can I start running again.  That’s the biggest hurdle mentally that we fight through all this is not being able to do some of these activities that we use to kind of take racing off of our mind because once the racing season starts, any given Saturday I’m kind of looking for a golf course after practice is over to relax a little bit, and right now I’m not able to do any of that”, Hamlin said confidently.

When asked how this rehab is going in comparison to his first rehab Hamlin had the following to say:

“Well, this one is extensively worse than the first.  The best explanation that I get is that the first one I used the cadaver and I needed to get back in the race car right away, so we did a cadaver and we didn’t use any parts of my hamstring or any other parts of my leg simply for recovery purposes.  It would recover faster, and we didn’t think we’d have any injuries to that same leg going forward.

But this is kind of a new latest way that they’re doing these surgeries.  Obviously when players are out in football or basketball, they’re out for one year on an ACL, where we don’t have that time to recover as race car drivers.  Since this has happened in the off-season, they chose to do it this way, which is a little bit longer recovery process, but it should be stronger in the long run.

Even if I gain one to two percent more reliability with it, it was worth it to me to go through that extra rehab process to know that it’s just going to be a little bit stronger than if I would have done it the other way”.

Even though Hamlin’s knee is responding slower than he had anticipated, it will not stop him from climbing into his race car when Speedweek opens up at Daytona.